Video of this song from youtube
Average Rating : 4.41
Total Vote(s) : 70
Please rate this song between 1 star and 5 stars (5 stars being the best). Just move your mouse on the stars above and click as per your rating. Your rating will really help us to improve our website. 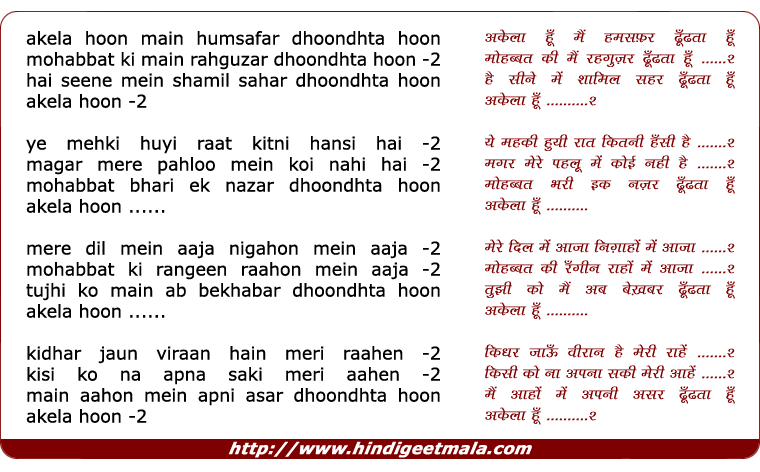 Comments on song "Akela Hu Main Hamsafar Dhoondhta Hu"
MyKaempfer on Wednesday, November 07, 2012
The song was never "under rated". Actually the film got released in 1967
and flopped. In the same year, Shankar Jaikishan came up with hit films
like "An Evening In Paris", "Raat Aur Din", "Laat Saheb" etc.; R.D. Burman
came up with "Baharon Ke Sapne"; Kalyanji Anandji came up with "Upkaar",
"Aamne Saamne"; Ravi came up with "Hamraaz", "Nai Roshni". Also, there was
no other good song in this film, which could be compared with the above
mentioned songs.

Pepe Chareetur on Friday, February 11, 2011
This is one of my all time favourite songs. Watched the movie in the 60s.
Mala Sinha - What a gorgeous woman! Biswajeet did well in this movie. Rafi
is Rafi! No comment! I shot this song on HD video on the rocky part of the
Amanzimtoti Beach in Durban South Africa. It's a gem to watch. As a matter
of fact most of Biswajeet's Hindi movies got beautiful songs. I haven't
watched his Bengali movies,so I cannot comment.

786maq on Sunday, July 25, 2010
Fantastic song..sung by the Legend Rafi saab . there will be
never another Rafi. current singers all a joke. Rafi saab voice is the
bench mark for all those who think they can sing.

smodass on Friday, June 26, 2009
Thanks for uploading this song . I had been looking for this for a long
time. Amazing singing by Rafi and music by LP.