Video of this song from youtube
Average Rating : 4.24
Total Vote(s) : 113
Please rate this song between 1 star and 5 stars (5 stars being the best). Just move your mouse on the stars above and click as per your rating. Your rating will really help us to improve our website. 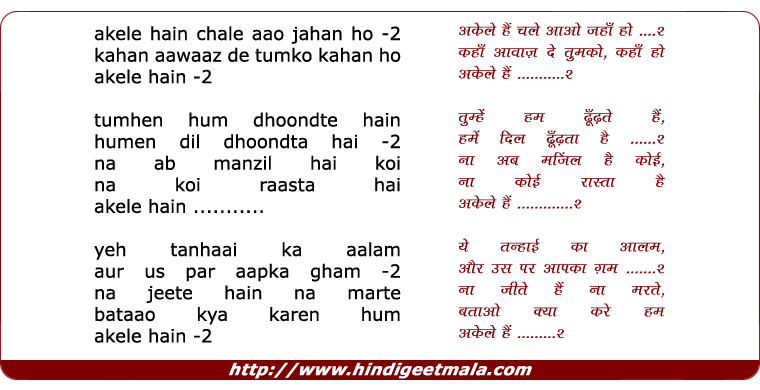 Comments on song "Akele Hai Chale Aao Jaha Ho"
Devendra Singh on Monday, November 16, 2015
Excellent song by Rafi Sahib. Beautiful rendition. Very soulful singing
under the music direction of maestros Kalyanji Anandji for 1967 movie Raaz.
Shamim Jaipuri penned this emotional song and was picturised on Rajesh
Khanna. It was the first movie of Rajesh Khanna, though released after
Aakhiri Khat. Babita too was introduced in this movie. It would always be
remembered for its popular songs that are still fresh.﻿

Satish Sachdeva on Monday, March 23, 2015
Rafi Sahab, this sad song is so touching. with soft voice and intense
feelings.Only Rafi Sahab could do this. The vacuum he has created
can never be fulfilled. Flawless and god gifted singer.﻿