Video of this song from youtube
Average Rating : 4.46
Total Vote(s) : 1076
Please rate this song between 1 star and 5 stars (5 stars being the best). Just move your mouse on the stars above and click as per your rating. Your rating will really help us to improve our website. 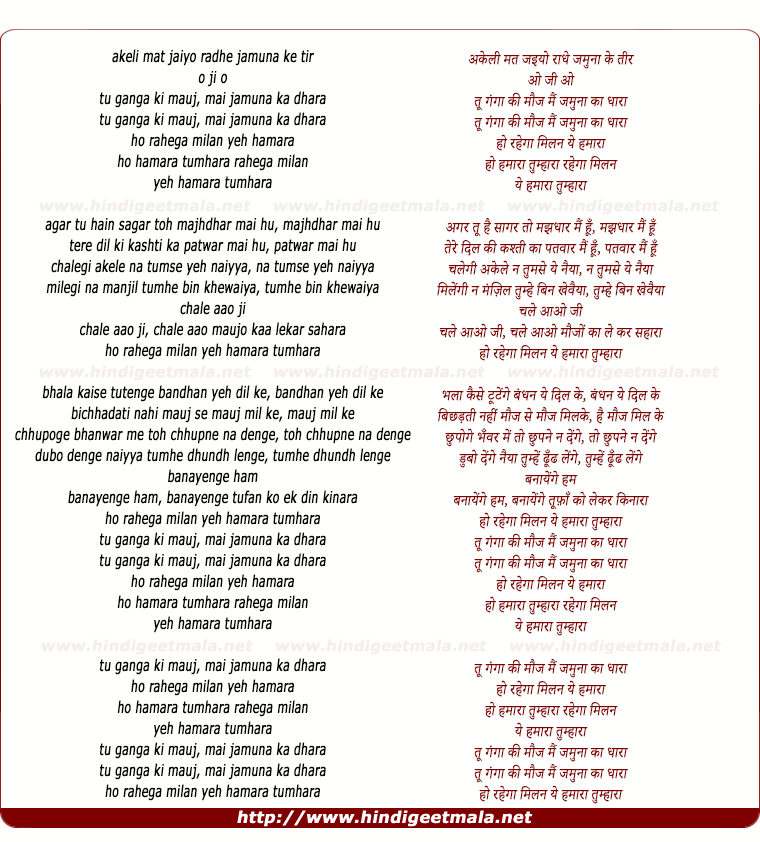 Comments on song "Akeli Mat Jaiyo Radhe Jamuna Ke Tir"
orientlover1 on Monday, February 14, 2011
Has anybody noticed at 2:32 to 2:36 a fly sits on right forearm of Meena Kumari walks down toward her elbow and then disappears. Can anybody tell where it is now!!!!Was it ever cast in any other movie???
zfk110 on Saturday, February 07, 2015
The most versatile singer India has ever produced, sang each song with such
distinction, that left the listeners spellbound. The effortless transition
across the entire range without any strand of strain, flawless emoting made
him the king of playback singing... No doubt his humility, unassuming
attitude, soft spoken nature, and reverence for mankind produced such a
voice which came direct from heart... It's true that music is about emotion
and not only technicalities, and he was master of both﻿

Sholay48 on Monday, September 16, 2013
I note that there are 62 people who have shown dislike to this song. It
would be nice and honest if they could have put the reasons why. Maybe
there is something wrong with the song that most of us are failing to
recognize. We are all humans and sometimes we may be biassed and blindly
join a band wagon or like something. I would make an appeal to these people
to please teach us something that we may not know by pointing out why they
dislike this song. And this will do us a world of good. Thanks

BhanuKer on Saturday, March 02, 2013
"Akeli, mat jaiyo, Raadhe, Jaumna ke beech" Alone, do not go Radhe (girl's
name), to the middle of the river Jamuna "Tu ganga ki mauj main Jamuna ka
dhaara, ho ragega milan, yeh hamara tumhaara ho rahega milan" You are the
force of the Ganges, I am the flow of the Jamuna, our meeting is inevitable
"Agar tu hai saagar to majdhar main hoon(2)" If you are the sea, I am the
oarsman "Teri Dil ki kashti ka patwaar main hoon, patwaar main hoon" I am
the one who will steer the way of your heart.

imranwzd on Sunday, July 19, 2009
Many critics opine that the songs of this feature film springboard Mohd Rafi from an ordinary singer to the legendary status as a playback singer of Indian commercial cinema. The perfect range, synchronisation, consonance of voice with the classic melodies and reverberations which the late Mohd Rafi Sahab displayed by rendering his immortal voice for the songs of this movie is unparalleled and such heights have never ever been touched by any Indian playback singer ever since in their career.
View all 281 comments related to song Akeli Mat Jaiyo Radhe Jamuna Ke Tir