Video of this song from youtube
Average Rating : 4.48
Total Vote(s) : 25
Please rate this song between 1 star and 5 stars (5 stars being the best). Just move your mouse on the stars above and click as per your rating. Your rating will really help us to improve our website. 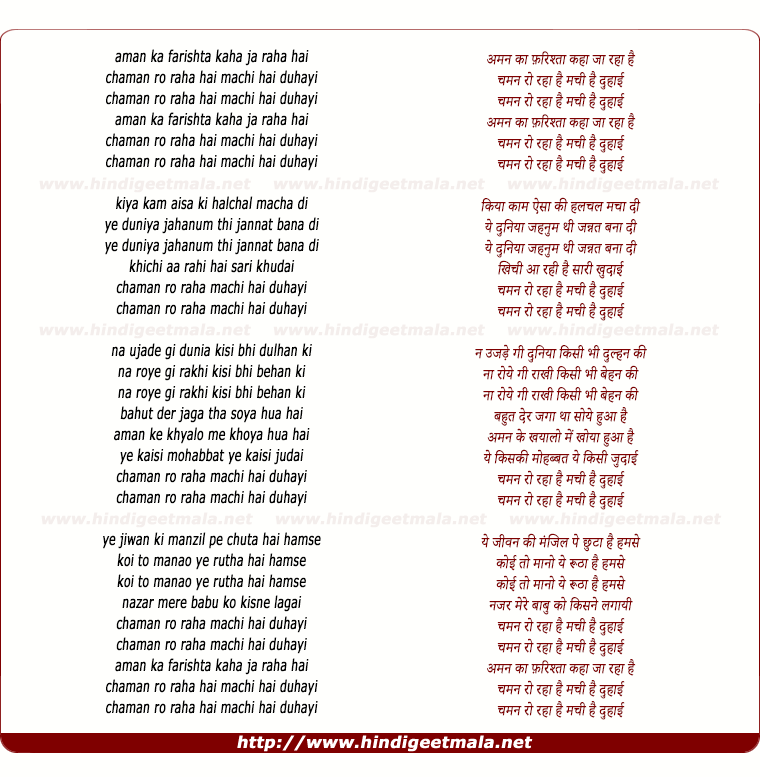 Comments on song "Aman Kaa Farishtaa Kahaan Jaa Rahaa Hai"
aceji on Tuesday, December 29, 2009
PAIGAM E AMAN or OM SHANTI for PEACE on this EARTH. This film, in a small
way, was pointing to the dangers of TOTAL DESTRUCTION OF LIFE as we know
it, by WMD.

bond7s on Saturday, August 07, 2010
A tribute to those who gives their lives for peace but most of us do not acknowledge it as now people are like Mr. Kalmadi who are beyond shameless
FAQEERAHMED on Monday, August 03, 2009
this is not a voice . who ever said this was a voice. this is sounds coming
from heavens. ya ALLAH WE SUBMIT TO UR GREATNESS. SUBHANALLAH

tomsharma on Tuesday, May 11, 2010
It is Hasrat Jaipuri...He was a regular member of the Raj Kapoor's music team along with Shankar Jaikishan,Mukesh and Shailendra.
View all 16 comments related to song Aman Kaa Farishtaa Kahaan Jaa Rahaa Hai
Popular Links on HindiGeetMala