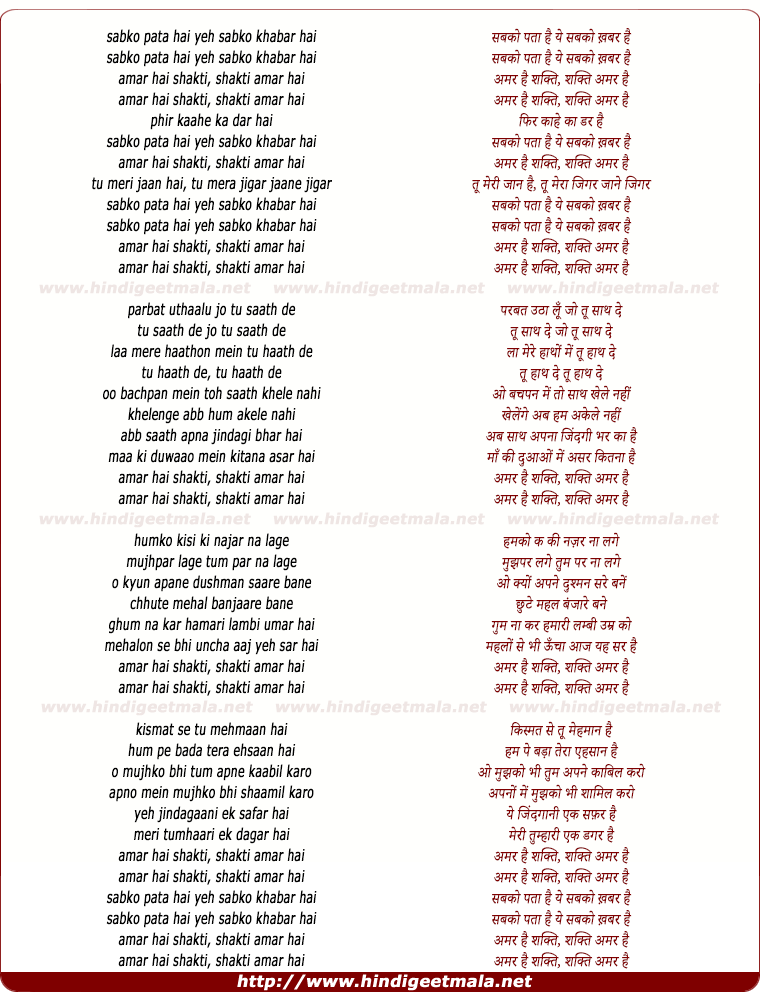 Comments on song "Amar Hai Shakti, Phir Kaahe Ka Dar Hai"
man from philly on Sunday, January 04, 2009
oh no - i also consider rafi the greatest. i have been a big fan since age
5 when listening to "salamat rahe dostana". but the key phrase here is "i"
and "imo". people have different tastes. if someone just intrinsically
prefers kishore's voice & style - no amount of arguing will convince them
that rafi is better. it's taste. rafi is good in this song but there are
hundreds of songs where rafi just throws the standards into the sky with
his magnificence. my favorite rafi & kk duet is in dostana

phirmilenge on Tuesday, October 13, 2009
Very correct. Mainly SDB and KK himself boosted KK before 69 and then RDB
afterwards. KK was banned from AIR for sometime during emergency like you
said. For 5 years 70-75 KK did share top spot with Rafi saab so thats a
great accomplishment for anyone but KK-fans should not exaggerate so much
by saying he was better than Rafi saab. They should listen to most recent
Manna Dey youtube clip where he says again Rafi saab was the greatest ever
... he was entire gharana-khandaan of music by himself.

doovle on Monday, October 12, 2009
See an artist as versatile as Kishore did so many other things other than
just sing. When he started out in the 50's and 60's it was more acting he
specialized in. His schedule must have been pretty hectic. And then he was
banned after he refused a song or something for someone. That didnt help
matters. However... everybody knew just what kind of talent there was
lurking inside of him. And come 1971 when Aradhna came about, it was all
Kishore ! You are correct, facts always remain in history.

man from philly on Sunday, January 04, 2009
rafi set the standard very very high imo. his voice was good in 1978 but it
was even better in 1960-1965. It was even velvetier, crisper, more robust,
fuller, clearer. but rafi's voice was just one asset. even in the 80s when
his failing health made his voice inconsistent, he still had that magic of
singing from the heart and making the heart of listeners melt. his
versatility was one thing but the man had incredible bandwidth. he could
express so many emotions seamlessly in a single line.

labeeb241 on Sunday, April 10, 2011
@doovle If u say Rafi sounded like child, thin and weak and Kishore was
soft and gentle, then u r biased in your comments. Singin with loud voice
is different from singing in high notes. Even I can sing easily Jaane jaan
dhoondta hoon tujhe... Please listen more and more, it is not like having
personal issue with you as i am not just a Rafi fan but Kishore's also.
Being fan of someone and liking someone more than other is different and
criticising and giving expert comments is different.