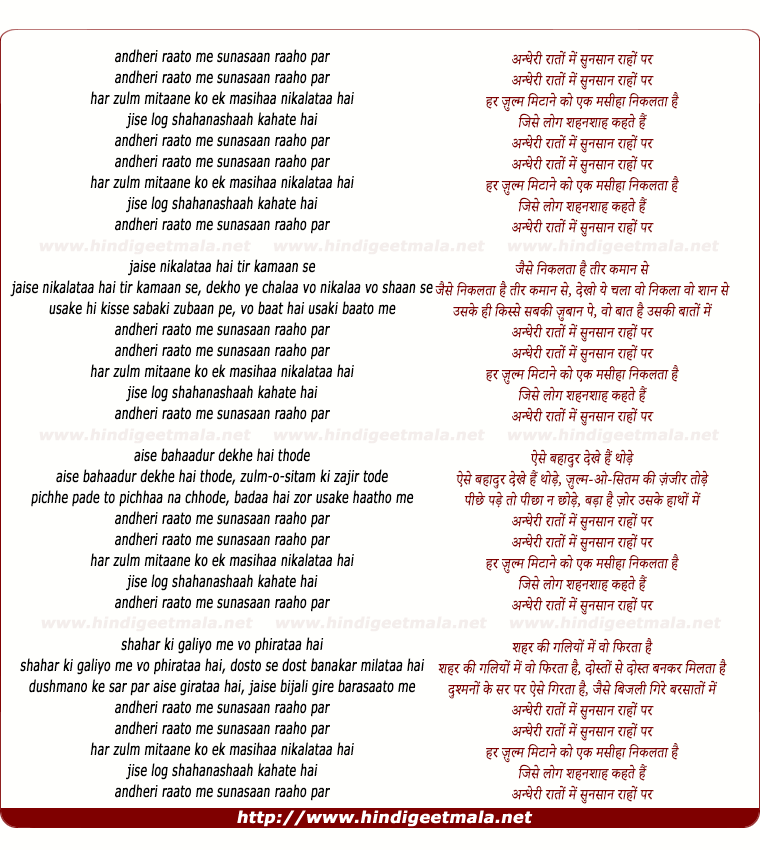 Comments on song "Andheri Raaton Me, Jise Log Shahanashaah Kahate Hain"
rahul sinha on Thursday, May 01, 2014
''The day he stop singing for Amitabh bachchan as a super star Amitabh
bachchan finish''.then he came back and sang this song and film became hit
apart from coolie where he got the nation sentiment for an accident he was
suffering no other film of that era ware hit of mr bachchan when he had a
misunderstanding with kishore kumar he refuse to sing for him and result
MARD-AVARAGE,INQLUB-FLOP,MAIN AZAD HOON-FLOP,AAKHRI RASTA-AVARAGE,Manmohan
desai urge him to sing in his two movie cooile and mard laxmikant pyarelal
and anu malik request him several time to sing he refuse and said unless
and until Amitabh came and apologies to me i will not going to sing for
him, Amitabh quickly realize the fact and apologies to kishore kumar shows
the power of this man who convert a person to a superstar,i don't think
today's singer have that quality.﻿

imranwzd on Wednesday, April 01, 2009
The legacy of superhero characters performed by the great Amitabh lives on and I have to admit this that this person has touched those heights of popularity and fame which in Indian sub-continent no one has ever since gained. This movie definitely deserves an equally good sequel and to me Hrithik Roshan can play the part of a protagonist / hero of that movie, whenever that would be planned. As of this title track of Shahenshah, just few words exceptional, bone-chilling and inspirational.
yuvraj01 on Saturday, August 23, 2008
was on today on TV, AWESOME movie, with equally AWESOME tracks by Amar
Utpal, the one hit wonders, sad they did not go onto make more hits, this
film DEFINITLY deserved a sequel, maybe not possible now, but closer to the
time it came out this movie should have got one, but I suppose back then
the sequels weren't in vogue then, in bollywood anyway...


doovle on Tuesday, January 01, 2008
Kishore Kumar has sung this song with so much feeling and intensity that it
was almost as if you could feel a real-life Shahenshah walking through your
streets. Absolutely effortless singing! A large part of this song
picturised in the film was cut, but try to get the music cd and then listen
to the entire song if you can!

Mohammed ALI on Friday, February 15, 2008
Thanks mate i thought no one would reply. Thanks for the offer but i would
be really gratefull if you could put on Mera chand mujhe aaya hai nazar by
Kumar Sanu the video version