Video of this song from youtube
Average Rating : 3.73
Total Vote(s) : 639
Please rate this song between 1 star and 5 stars (5 stars being the best). Just move your mouse on the stars above and click as per your rating. Your rating will really help us to improve our website. 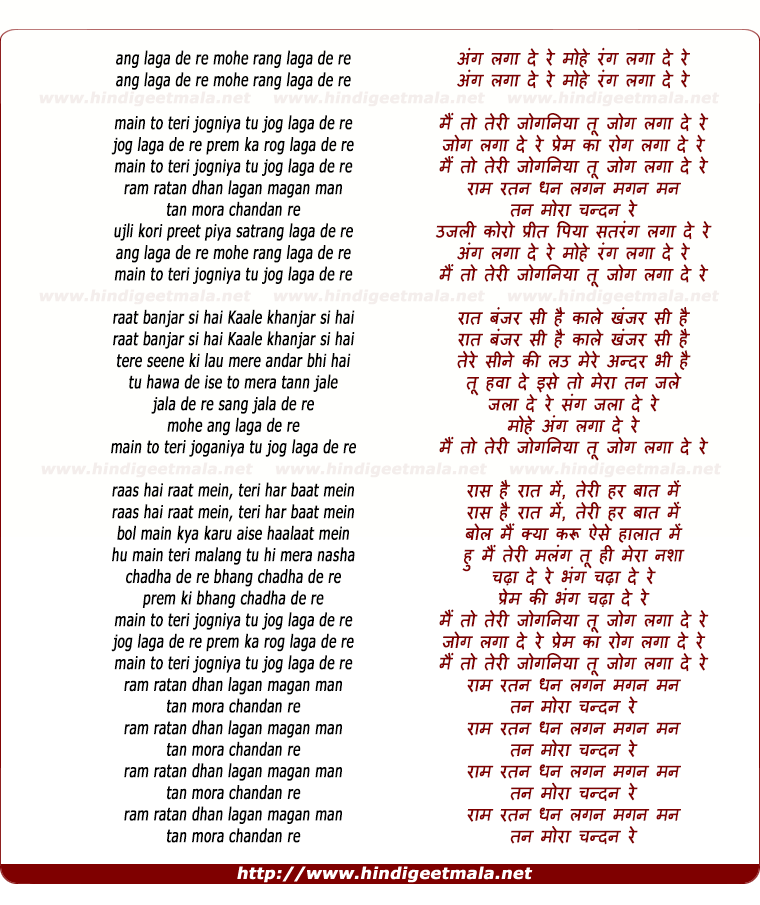 Comments on song "Ang Laga De Re, Jog Laga De Re"
ermahgerdperderders2 on Tuesday, January 07, 2014
+khungrahni I think Mr. Bhansali used her tattoo on purpose...because if he
had an honest problem with it, he wouldn't have used it in the film. It's
also shown at the most significant part in that song, which shows their
love for each other...Idk maybe I'm overthinking lol, but I mean, there
must be a reason as to why he didn't even cover it to the slightest bit.
Deepika is truly an amazing actor, she's beautiful, she can act, she can
dance..she's honestly the best I've ever seen. I can officially say I've
developed a girl crush on her. And the amount of hate towards her is
utterly ridiculous, but looking at a bigger scale, the people that hate are
just a handful. Lol and sorry for making this so long, but I thought I'd at
least share my thought on the tattoo part with you..I didn't think there
was a point in making a seperate comment. My list goes on and on as to why
I admire her and why she's my role model, but that's another story for
another day. Anyways, I'm terribly sorry for the huge paragraph:)﻿

surajsunsuraj on Thursday, January 02, 2014
i loved Deepika beauty and acting in chennai express, infact i felt that
the movie is really so good and watchable 80% because of her acting and
beauty. she was awesome in that movie and her acting was really great with
that tamil accent. In Ramllea she again excelled in her acting and
protrayed feminine sensuality with utmost grace and look seductive.﻿

Zahra Tekinoglu on Saturday, December 07, 2013
I always love depikaa she is an amazing actress , I am not very fan of
ranveer but in this film i am totally changed my opinion ... Ranverr is
amazing . Good actors good movie good song good dance good decors but i
thought the love story between Ram and Leela are extended but not its so
simple tey are saw theey are fallin in love ...﻿

Breezy Breeze on Saturday, November 23, 2013
The chemistry between Deepika and Ranveer is incredible. Deepika is just an
ethereal beauty with so much talent. I've never seen a pair that oozes so
much passion on screen with just a kiss. I love this song, hope to see the
full version soon. They both were amazing in their role.﻿

surajsunsuraj on Thursday, January 02, 2014
I am a big fan of deepika padukone and feel that now the time has come for
us to acknowledge that actress are also on par with the actors. Yeh Jawani
hai Diwani, Chennai Express and Ram Leela are all block busters and each
movie had different actor but the actress is the same. ﻿