Video of this song from youtube
Average Rating : 4.48
Total Vote(s) : 23
Please rate this song between 1 star and 5 stars (5 stars being the best). Just move your mouse on the stars above and click as per your rating. Your rating will really help us to improve our website. 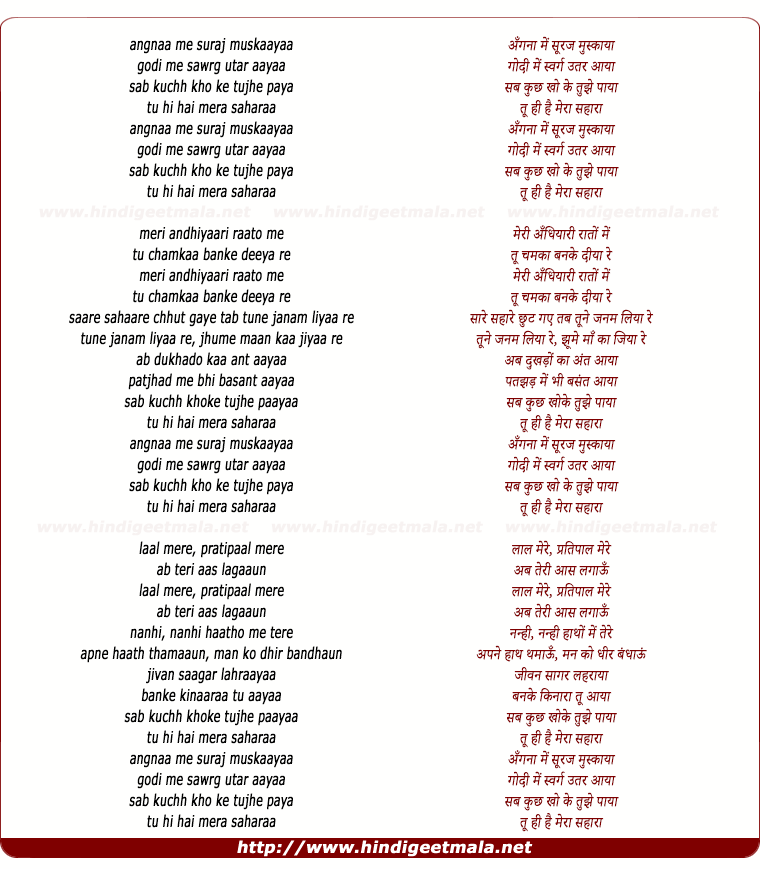 Comments on song "Anganaa Men Suraj Muskaayaa"
rumahale on Thursday, March 29, 2012
Stree (1961) - V Shantaram and Sandhya in the cast - lyrics by Bharat Vyas
and music by C Ramachandra. This song tune is reminiscing those old tunes
from CR - Lata Mangeshkar gems which we saw recently thanks to "ajayuv'.
Excellent lyrics, enchanting music and soulful singing makes it a great
presentation. Thanks.

Dee Thakore on Thursday, March 29, 2012
Bharatji, Shakuntala wasn't unmarried woman. Kalidasa, had written a love
story of a King Dushyant and Shakuntala. In this story this couple has
Gandharv Marriage rituals, where both of them marry secretly by giving a
garland to each other. Without a brahmin or yagna-phera or relatives from
both sides. She is exile due to memory lost of her lawfully wedded
husband...it wasn't that she was hiding her pregnancy.

Bharat Gul on Thursday, March 29, 2012
What can plumb a young mother's tenderness toward her baby better than the
divine voice of Lataji? The lovely paradox here and in Lataji's many other
mother-baby songs is that as an unmarried woman she herself never could
directly experience being a biological mother in our culture. No matter:
biology is not destiny. Thank you, COS.

Dee Thakore on Thursday, March 29, 2012
Sandhya is a younger sister of Jayshree (mother of Rajshree). She only
worked for her husband Shantaram for his films. Previously V. Shantaram
made Shakuntala (1943) as producer, director, actor.

ravi7550 on Sunday, September 27, 2015
Another gem from the riches given by Lata & C.Ramchandra.Just too beautiful
song from a film based on the Greatest Epic 'Abhigyan Shakuntalam' by
Kalidas
Ravi Sinha﻿