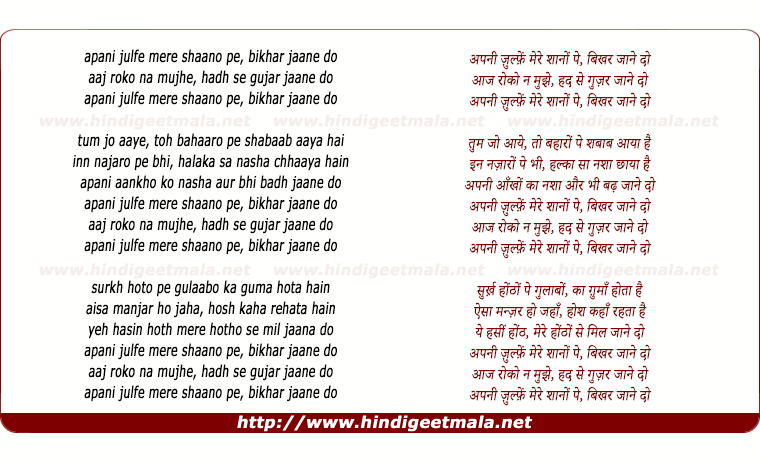 Comments on song "Apanee Julfe Mere Shaano Pe Bikhar Jaane Do"
Mia on Thursday, December 29, 2011
@razmalik Exactly! I've been wondering the same! I want to see this movie
ever since the promos came out but never got the chance to see it in
theatres. I waited for it to come out to DVD but it never did! I have been
searching all over the internet and can't find it anywhere! If I did find
something, the quality was so bad that it wasn't viewable and I'm not a
native hindi speaker so I need the movie to have english subs. Any help
from anyone would be greatly appreciated!!

mmuuzzaammiill on Saturday, July 23, 2011
this is such a beautiful nice movie, might be the actor ZULFI saeed and
actress sonai jehan made it really beautifull...its
was really a nice movie for me the location and the songs awesome i have
downloaded all the songs, and i just love the songs, and the way they
worked on songs that it really mindblowing, i mwriting it because i wanted
to see them in some other movies too ..See u soon Zulfi bhai
and Sonia jehan.

razmalik on Monday, September 26, 2011
My wife loved this film when she saw it in the cinema, she was one of the lucky ones to see this movie. It looks like it has dissapeared from sight strangely enough. All flops make it onto DVD in the hope they can make a health return on the investment but this one seems to have been canned like no movie i have ever seen canned before. Does anyone know of some way I can get this movie?
mmuuzzaammiill on Saturday, July 23, 2011
That is true dude Zulfi bhai is so innocent and no bollywood actor get that
innocency, as well as Sonia jehan too, and just this innocency truthness
made the movie really nice and awesome, and this thing was required to make
a movie in a memorable way.

lumia2011 on Thursday, March 07, 2013
can someone upload this in better res the magic is lost due to poor quality
wonderful picturisation though