Video of this song from youtube
Average Rating : 4.20
Total Vote(s) : 635
Please rate this song between 1 star and 5 stars (5 stars being the best). Just move your mouse on the stars above and click as per your rating. Your rating will really help us to improve our website. 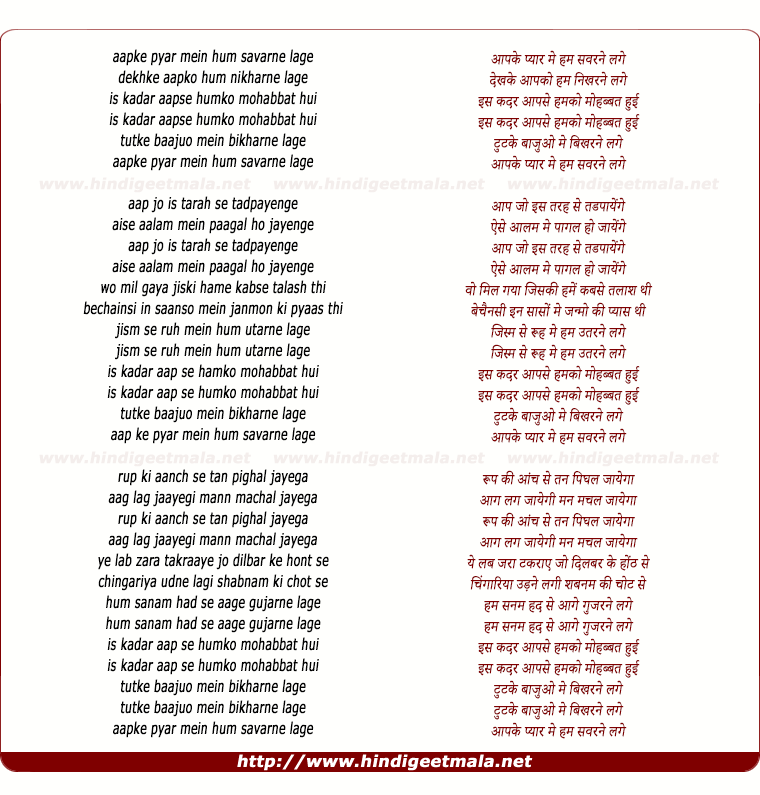 Comments on song "Aapke Pyaar Me Hum Savrne Lage"
cfx3002 on Friday, December 07, 2012
Malini Sharma is an Indian model and actress, who has worked in videos like Kya Soorat Hai and movies like Raaz.[1] For her role in the latter, she received the 2003 Zee Cine Award for Best Female Debut.[2]
sslal777sl on Saturday, January 12, 2013
Reallyyyy so much love.. If only u could turn it into reality behind the camera's..which is a life that formed is different ways. plp just dnt unserstand.. live and be loved.
liverpoolisbest1001 on Sunday, September 23, 2012
Great songs never disappears. Those were the good old days. Really sad that
these are no more such melodious songs nowadays. Alka Yagnik - name is just
enough. Nadeem-Shravan should have won award for this movie rather than AR
Rahman for Saathiya. Raaz songs were much popular and melodious than
Saathiya.

alokkumarkundu on Thursday, July 08, 2010
Sorry.I had put the headset and was working while listening to the
audio. Honestly, the great Nadeem&Shravan pair!! Absolutely, divine
composition