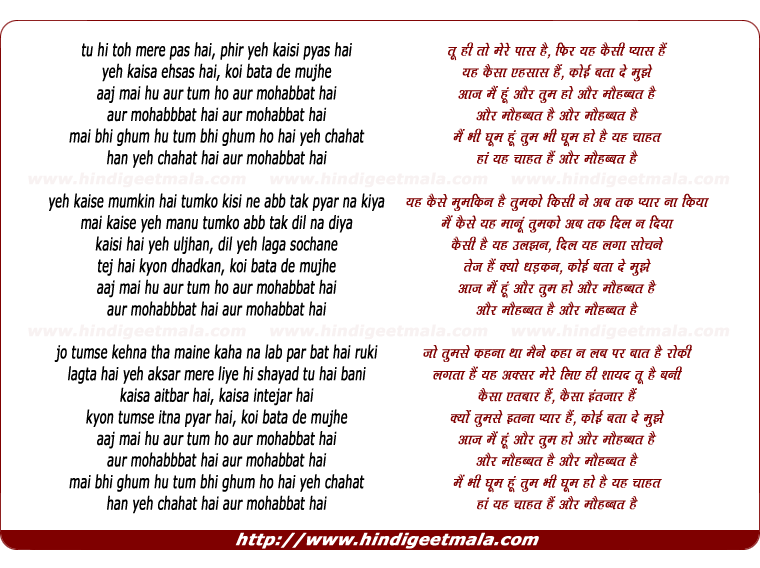 Comments on song "Aur Mohabbbat Hai"
drkillwantsu on Saturday, August 22, 2009
If someone saw this video on a random note, they would come to the
conclusion that she's on steroids. Or just lots and lots of coffee. I don't
completely blame Kareena on her overreacting, I blame the directors too who
can;t seem to say 'Hey, Kareena, you look like you swallowed a carton of
batteries. Chill.' Seriously, she's bouncing all over the place..It's
hilarious yet painful. Love her though.

gannyboy012 on Thursday, April 08, 2010
in this movie i guess abhishek was the only one who wasnt overactin both
hrithik n kareena where at there irritating best . well but it was an early
stage in there career n now all three of thm r superstars. would luv to see
thm all together again . with roles of equal importance not like dhoom
where abhi had nothin to do it will be fun to watch thn

llJ613Pll on Tuesday, September 16, 2008
very nice melodious song!! shaan is the man! i personally didnt think the
movie was THAT bad.. it had flaws but it was pretty good-ish. i wouldn't
say it was like a pain to watch. im crazy about hrithik but i hated how
they made him act in this! kareena looked cute and prettyy

khushiamena on Friday, April 03, 2009
great movie hrtitik kareena and abhishek doing fantastic job i love this movie, welldone kareena hritik and abhishek, and best of luck for future films.
ohYEAH629 on Saturday, September 20, 2008
i loved the way abishek looked in his older movies, now he just looks
WEIIRD with the beard and stuff lol, buut i love this songg its awesomee