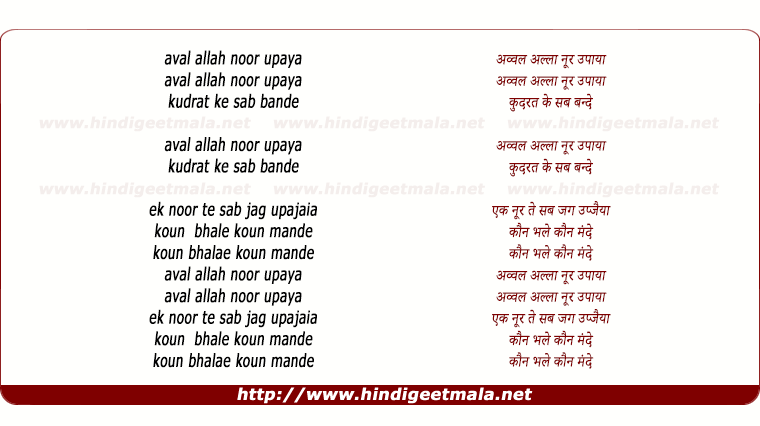 shubhchintan on Saturday, February 12, 2011
@romsirox ... you mean all the singers who sin allah hoo in masjid... are doing a wrong thing?
Jalebiiiiiii on Tuesday, July 19, 2011
...and further, I most certainly hope that my clarification did not offend,
because that was not my intention. I agree that all humans are equal and
that NO ONE should discriminate or be treated any different based on their
religion or race! We're all one people, and I honestly wish that there were
no conflicts in the world because most religions promote peace in their
scriptures!! I certainly hope you understand that I didn't mean to upset,
but just to academically clarify! :-)


Jalebiiiiiii on Tuesday, July 19, 2011
@Punjabkick I was simply pointing out that in SIkhism there is not one
specific name given to the supreme being. As for the influences of other
religions upon its scriptures, from an ACADEMIC perspective it's difficult
to deny that ANY one religion is completely isolated from the influence of
religions before it or of those in the same era, b/c of cultural, political
and social interactions which undoubtedly have an influence! I hope I
clarified my point! :-)

rOmsi i on Friday, February 04, 2011
"Allah" shud not be allowed to be sung in songs.. Its wrong.. They shud be
stopped or punished.. Allah's name in songs is so wrong..Allah is a lovely
name used in dua n prayers not songs