Average Rating : 4.85
Total Vote(s) : 26
Please rate this song between 1 star and 5 stars (5 stars being the best). Just move your mouse on the stars above and click as per your rating. Your rating will really help us to improve our website. 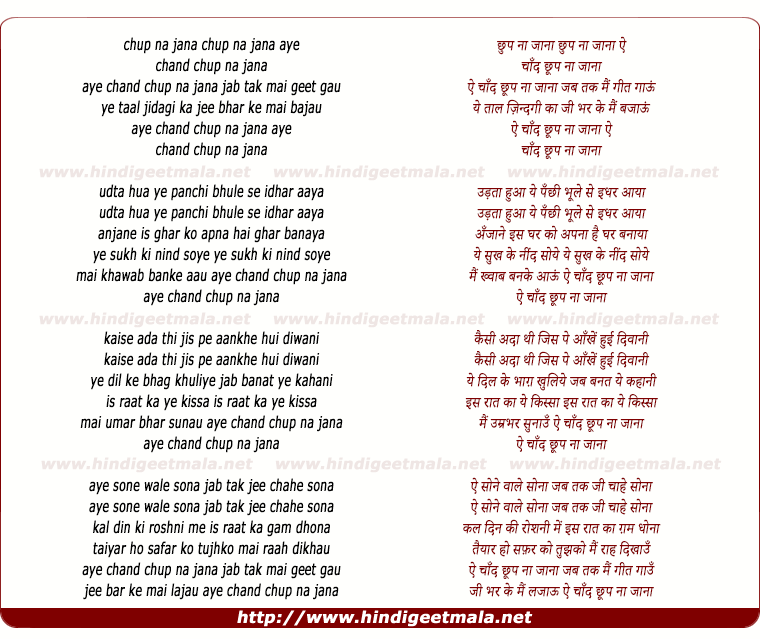 Comments on song "Chhup Na Jana Aye Chand Chup Na Jana"
orientlover1 on Tuesday, July 24, 2012
I think images of Madhubala and Dilip Kumar in the above clip are from some other film and not film Jawab. Madhubala was born in 1933 and was only 8 or 9 at that time.
chandrashekharjain on Wednesday, June 30, 2010
WONDERFUL Real tribute to leged Kanan Devi ji song in a new look with
another legend Madhubala 'the beauty of indian screen' at the age of sweet
sixteen ( film Shringar).Such re- created videos re-surface the vintage
gems lest the present high-tech generation should forget them One should
keep in mind that matching of lips to the words ,dance movements & face
expression to the music especially by an amateur artist is not easy, still
Mr Mukhtar does it so successfully. CONGRATULATIONS SIR !!!

Dilip Kapasi on Friday, July 23, 2010
Hummm.Madhubala and Dilipkumar's selection into this is perhaps
fine..but words coordination is NOT there..which must be there..Plus it
appears quite a bit flashy if you know what I mean... In Kananbala's own
voice, and in movie Jawab only...I love this song to my heart and no one
can take that away..so what can I say? Please if you do something keep a
straight focus, which you have. I respect that..

Moid Hasan on Tuesday, September 13, 2011
No-2 Kanan Devi started her film career with Kananbala as child star , in
silent film 1926,Joydev, an untrained singer,1935 Basabdatta and
Girls'School﻿ ,1937 Mukti (Barua) 1939 Street Singer 1939 jogijog and
Hospital, P.S.Barua was unable to obtain her for the role of Paro in Devdas
1935, but played the lead in his next film mikti 1935, her last film was
1959 Srikanta-o-Anandididi.