Video of this song from youtube
Average Rating : 4.50
Total Vote(s) : 442
Please rate this song between 1 star and 5 stars (5 stars being the best). Just move your mouse on the stars above and click as per your rating. Your rating will really help us to improve our website. 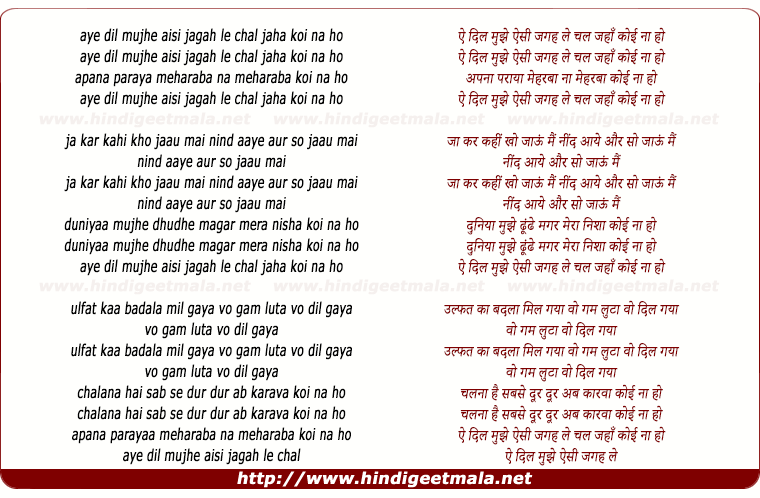 Comments on song "Aye Dil Mujhe Aisi Jagah Le Chal Jahan Koi Na Ho"
Narender Soni on Friday, September 21, 2012
After trying Mukesh's voice for Dilip Kumar in Anokha Pyar,Mela and Andaz,
Anil Biswas proposed to use Talat Mahmood's voice for him. Dilip Kumar in
Aarzoo,already a superstar then,was present in the studio while recording
the song and Talat became so nervous that he couldn't sing it properly.
Dilip obviously didn't like it.Next day when he wasn't there, Anil Biswas
got it re-recorded in Talat's voice and that was liked by all and became
super hit. The song was "Ae Dil Mujhe Aisi Jagah Le Chal"

rumahale on Sunday, July 29, 2012
You have spoken my mind. I agree totally with the views expressed regarding
the state of affairs prevailing at present in Indian Hindi movie world, and
also regarding Urdu poetry; I am always enamoured with the poetry, though
at times may not be knowing meaning to full extent - this is the beauty of
poetry. True, this is one of the foremost songs of Talat Sahab, and,
interestingly it was his first for Anil Biswas; in fact AB encouraged him.
Thank you for excellent comments and appreciation.

Colonel Rao on Sunday, July 29, 2012
This is one of the best songs of Talat sahib enacted on legend Dilip
Sahib.Songs from that era had excellent poetry and singers rendered them in
fluent urdu which is great language. In fact Urdu ghazals are far superior
to pure Hindi Ghazals.Music has degenerated. Tastes have deteriorated. Pop
songs have become a craze. There is no real music today. Very sad
indeed.Saigal, Surendra and Atma have remained in memories only. In fact
Hindi cinema is highly depressing.

PL AN on Sunday, October 13, 2013
I wonder how many hundreds of times I enjoyed singing this beautiful ghazal
in many a mehfil...Thanks, Talat Sahab for inspiring me to imitate
yourself, but in my own modest and humble attempts. Nevertheless, I merge
my own voice with your mellifluous and incomparable male voice every time I
sing your unforgettable and soul-stirring ghazals...! Thanks a lot to you,
yet again!