Average Rating : 4.48
Total Vote(s) : 807
Please rate this song between 1 star and 5 stars (5 stars being the best). Just move your mouse on the stars above and click as per your rating. Your rating will really help us to improve our website. 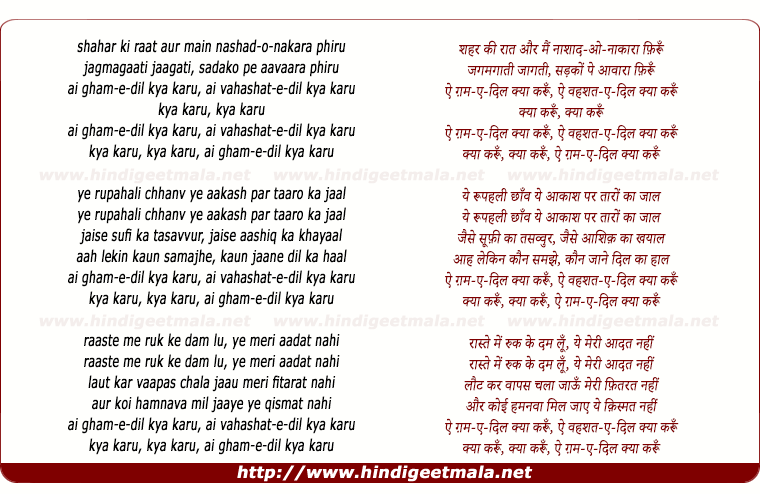 Comments on song "Ae Gam-E-Dil Kya Karu"
RealMusicKing on Saturday, February 26, 2011
@NANDIKHANNA Hello. Somehow it's recorded that GM's last song was in Hum Sab Chor Hain. He sang a duet with Lata in Carvaan 1957 and sorry I get recall the words. After that he sang here and there till about 1961 and again, I don't know the song. His downfall had two causes, his attitude and coming of Rafi. Till the end, GM cussed out Rafi for taking his style and leaving him nowhere, though Rafi never intended that way. Rafi was just too perfect of a vocalist the world has even known. Regards
RealMusicKing on Friday, February 25, 2011
@NANDIKHANNA Hello again. G.M. Durrani was singing before Mukesh & Rafi. GM sang in mid 1930's. Zindagi Hai Ya Koi Toofan Hai was sung by Khan Mastana & Asha music by Nashad(Shaukat Ali Dehlvi) written by Nakshab who took film title & words from Mir Dard (1721-1785) Ghazal
"Tohmatein Chand Apne Zimme Dhar Chaley, Jis Liye Aaye Sao Hum Kar Chaley, Zindagi Hai Ya Koi Toofan hai, Hum To Is Jeene Haathon Mar Chaley". GM did sing after 1956. Last was a recitation of Quran in Lal Pathhar 1975. TY

RealMusicKing on Monday, April 11, 2011
Hello. Talat acted as in small roles in Calcutta starting in 1945. His first appearance in Bombay was in Aaram 1951. His first film as a hero was Dil-e-Nadaan 1953 followed by Waris 1954, Dak Babu 1954, Raftaar 1955, Diwali Ki Raat 1956, Ek Gaon Ki Kahani 1957, Lalarukh 1957 and last was Sone Ki Chidya 1958. Studio dust began effecting his very "unique" vocal chords so after that, he remained focus on playback singing, non film geets & ghazals.
RealMusicKing on Friday, February 25, 2011
@NANDIKHANNA Nandi Ji, Namaste. Correction ki baat nahin hai. Ma'alumat ka radd-o-badal ek aham aur dilchasp cheez hai. Asrar ul Haque was born in Rudouli which used to be part of Zilla Faizabad. Districts were re-shuffled in mid 80's I believe which brought Rudouli in Barabanki. He was born in 1909 not 1911. He initially was known as Majaz Faizabadi till he moved to Lucknow and later became Majaz Lucknowi. He died in Lucknow. Regards.
RealMusicKing on Wednesday, August 11, 2010
Ajayji. Thank you. With his most UNIQUE voice, when Talat entered Bombay, he captured the attention of all Music Directors and top actors. Dilip, Dev, Raj, Shammi, Karan Dewan. They all loved to have Talat as their screen voice. Since Rafi's voice was a clone of somewhat...GM Durrani's who reigned in 1940's, Rafi's was not as welcomed as much in early 1950's.
View all 105 comments related to song Ae Gam-E-Dil Kya Karu