Video of this song from youtube
Average Rating : 4.42
Total Vote(s) : 135
Please rate this song between 1 star and 5 stars (5 stars being the best). Just move your mouse on the stars above and click as per your rating. Your rating will really help us to improve our website. 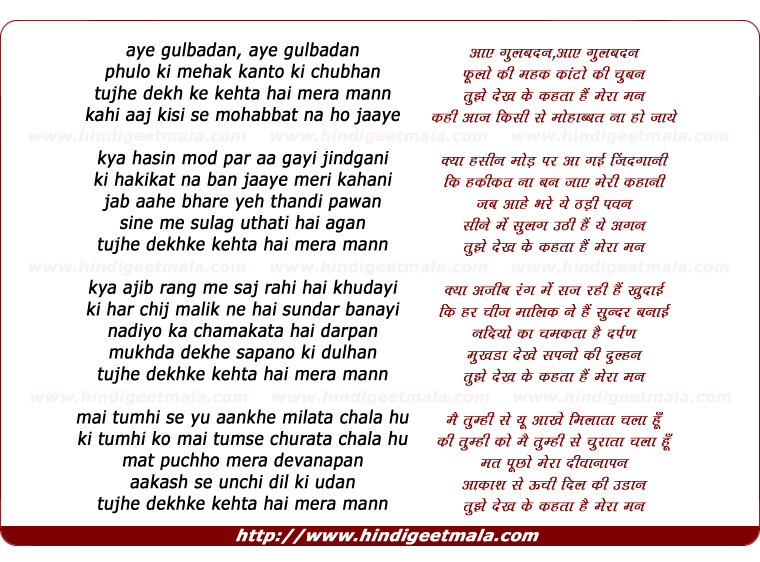 Comments on song "Aye Gulbadan, Phulo Ki Mehak Kanto Ki Chubhan"
85488899 on Thursday, September 29, 2011
The trio of great music united ..what a lovely thought. What an era , no where in the world was there such a concentration of talent as there was in INdia between late 50's to late 70's...and I have lived all over the world and I enjoy a lot of music genres - Nisha
Muneeb58 on Thursday, August 18, 2011
This is the class of Rafi.In this beautiful song he beautifully comes down at a very low pitch and goes up very high with out any error with glamour and mastery command.This is what Rafi was and that is why we say it is very difficult to have another Rafi.Great.
4628mb on Thursday, July 05, 2012
the greatest indian entertainer evr no doubt and his playback singer rafi. both make unbeatable legendary pair. god keep them in heaven. no oneevr can match them as long as this planet exists.
Gaurav Kumar on Monday, August 15, 2011
I am sure Rafi must be happy in heaven today and Shankar Jaikishan must have composed a great tune to welcome the inimitable Shammi Kapoor. We will miss you dearly.
cutesaladka80 on Friday, March 16, 2012
Kyun aur Kahan Chale Gaye Wo Din :( RIP Rafi Saab, Shammi Ji & Kalpana Mohan Ji . Will Miss Gems Like U Pplz :( RIP
View all 27 comments related to song Aye Gulbadan, Phulo Ki Mehak Kanto Ki Chubhan
Popular Links on HindiGeetMala