Average Rating : 4.30
Total Vote(s) : 90
Please rate this song between 1 star and 5 stars (5 stars being the best). Just move your mouse on the stars above and click as per your rating. Your rating will really help us to improve our website. 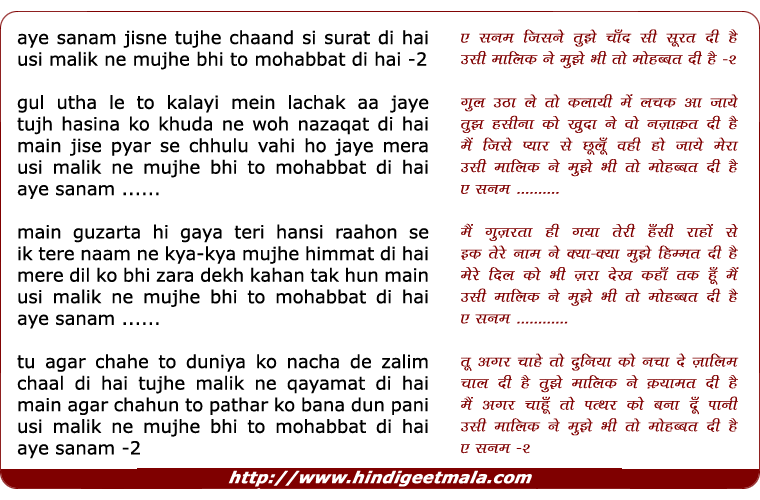 Comments on song "Aye Sanam Jisne Tujhe Chaand Si Surat Di"
yuanyuanyuanyin on Wednesday, November 17, 2010
- I certainly agree with you my dear Professor.
I have not seen this film. However I remember someone made a comment [when posted the video earlier] saying that they are the father and the daughter, according to the story line.
If that is so...a matching father and daughter, but they don't ACT here that way! LOL

chamogaa on Wednesday, November 17, 2010
. I don't know anything about the movie either, but the song is definitely not of a father singing to his daughter, and neither are RK's gestures paternal as you noted too, Yuan. RK's character is actually wooing SB's character through this unabashed romantic tribute. He definitely LOOKS old enough to be SB's father.
yuanyuanyuanyin on Thursday, November 18, 2010
- OMG, you are another one. LOL
I thought you were talking of the story!

I am sorry Professor. This is what happens when you do not know the language.
Similar things happened to me in the past too many times.

Thank you Mr. Jain for replying and clarifying the "issue".
Hope no more "sarcastic remark". LOL


chamogaa on Tuesday, November 16, 2010
S-J and Mukesh were made for each other as composers and singer. Can't say that for Saira Bano and Raj Kapoor. The delicate, lithe young thing like SB needs someone younger and more dashing, like Shashi Kapoor or Dharmendra, to serenade her, don't you think? Thanks, Yuan.
kirti kumar Khanna on Monday, June 18, 2012
wha wha what composition, and mukesh jee wapis aa jao what a voice .i love
listening mehndi hassan sahib jagjeet ghulamali jee and hariharan sahib and
i myself is a trained classical singer but when it comes to mukesh chand
mathur,.mujhe koochh ho jata hai .