Video of this song from youtube
Average Rating : 3.69
Total Vote(s) : 312
Please rate this song between 1 star and 5 stars (5 stars being the best). Just move your mouse on the stars above and click as per your rating. Your rating will really help us to improve our website. 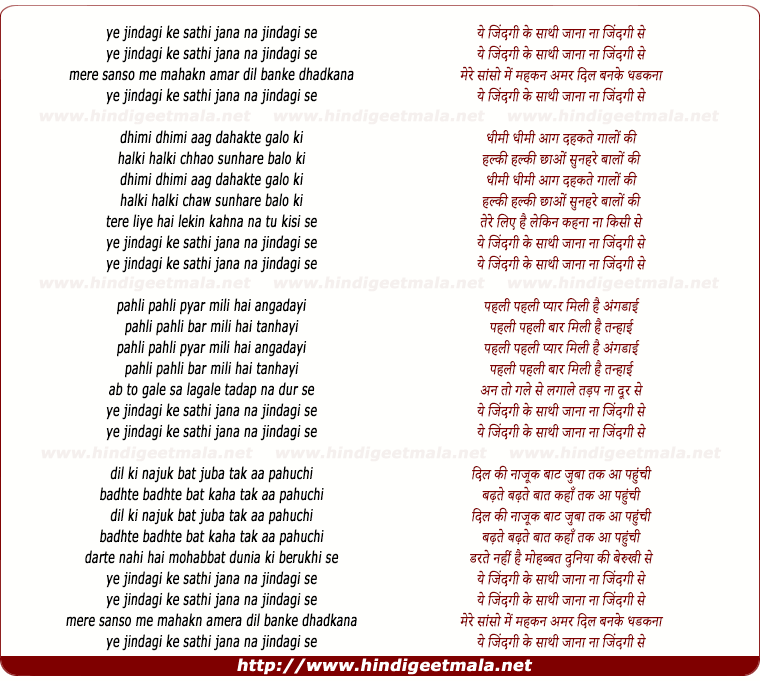 Comments on song "Aye Zindagi Ke Saathi, Jaana Na Jindagi Se"
jasbongy on Sunday, September 26, 2010
@derubala Beautiful,light song with lilting music. Suman ji sings according
to lyrics very smoothly and softly. Thanks aryankhan65 Thumbs Up Thanks Dee
for sharing this lovely song When Suman sings simple songs without very
high pitch she excels According to me on H.P. her voice gets shrilled I saw
Bela about 24 years back I was impressed by her personality. Quite tall
slim and fair she was clad in sari.Same place i had seen Vidhya Sinha who
looked great with her beautiful features Sarla

Dee Thakore on Saturday, September 25, 2010
It was some times after 60's Lata and Ms. Khanna had some professional
discord. So Suman was the best choice. slow chugging music with piano
almost remind me of OPN music. So here we are listining OPN and Lata...kind
of :) thanks for sharing great song... Love Bela, though

chandrashekharjain on Wednesday, September 29, 2010
Just as Suman Kalyanpur has similarities with Lata mangeshksr, so does Usha
Khanna with OPNayyar. Punjab factor being common. Nice song and nice
performance by Bela Bose. Thanks.

imranzaidi6 on Saturday, September 25, 2010
The song with romantic and amorous lyrics, has been beautifully sung by
Suman Kalyanpur.And then Bela Bose, with her attractive gestures,has done a
magnificent job in conveying her deep emotions of love in a sensuous
style,that is charming as well as appealing. Thanks a lot for sharing!

Latha Nelapati on Friday, May 13, 2011
I always used to think, if only I had a voice like Lata but now I strongly
feel that Suman's voice is more refreshing and soft and is taking you
places. So I wish i had a voice like suman. what a gift. wonder why she
never had Lata kind of popularity. Suman ji Jiyo hazar saal.