Average Rating : 4.43
Total Vote(s) : 7
Please rate this song between 1 star and 5 stars (5 stars being the best). Just move your mouse on the stars above and click as per your rating. Your rating will really help us to improve our website. 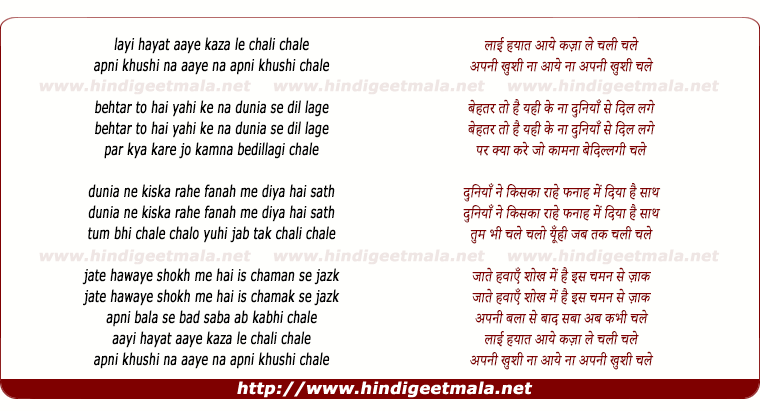 Comments on song "Layi Hayat Aye Kaza Le Chali Chale"
MrPakfaisal on Thursday, October 13, 2011
Beautiful tribute to the king of Ghazals Jagjit Singh. He will be remembered for the great contributions to music with his wealth of songs, bhajans, ghazals & music compositon he has left behind. It is a great loss to his fans & music lovers all over the world. Excellent clip of Mirza Ghalib serial you have chosen to give him this great Tribute. Thank you so much for this awesome Tribute & sharing it with us. A gem upload. Thanks for sharing.
Mub arak on Thursday, January 20, 2011
Life brought us to this world, and hence we came,
Death made us leave this world, and hence we leave,
Neither we came to this world excited nor we leave it happily.
It is better that we don't get too attached to this world
But what can one do when everything in this world gets attached to you.
Since when has the world been with someone who is a loser
So just go along with the going wherever it leads you to.

tariq usmani on Monday, June 11, 2012
i would like to to comment about humen nature.how he can be baised n how how he think for example some said jajgit sang very nice its true,but in most comment nobody taling about poet how he create a ghazal with this beautifull words which language is that urdu none had comment about it .this is a bised thinking n as a humen we all under influenced it.this gazal is master peaice simple is that.
incrediablehacker on Sunday, December 27, 2009
This Gazal Is Extrected From MIRZA GHALIB Serial. This plot shows that, how bad things become when .. IBRAHIM ZAUNK DIED.. one of my best ghazal from mirza ghalib serial...

khanofleeds on Thursday, November 17, 2011
no words to describe the loss of magical persona of Jagjit, and the ghazals he left behind in his heavenly voice will be enjoyed for a long time to come.RIP JS.
View all 23 comments related to song Layi Hayat Aye Kaza Le Chali Chale
Popular Links on HindiGeetMala