Video of this song from youtube
Average Rating : 4.45
Total Vote(s) : 82
Please rate this song between 1 star and 5 stars (5 stars being the best). Just move your mouse on the stars above and click as per your rating. Your rating will really help us to improve our website. 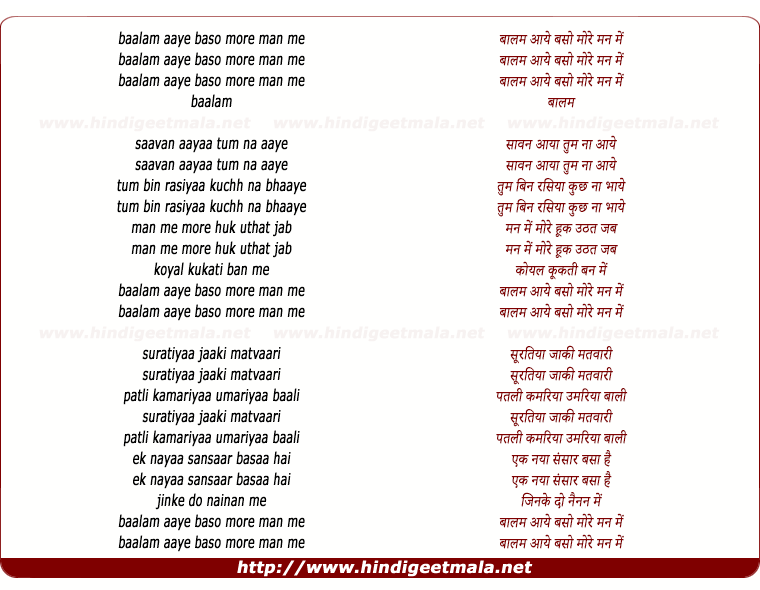 Comments on song "Baalam Aaye Baso More Man Me"
sm5931 on Saturday, August 25, 2007
Very beautifully rendered by Saigal, with Sarod played by Timir Baran
himself so much that it is even fresh now after 72 years- even though the
sound quality of recording was not good in those days.

ratanbidesia on Friday, October 16, 2009
This is most definitely from DEVDAAS(1935) starring KLS, Jamuna, Rajkumari (who aslo sang in this movie), Pahari Sanyal. Other singer in this film was KC Dey, Manna Dey's uncle.
Gothica247 on Saturday, January 09, 2010
Totally "mithaas" . Beats Jalebis, Barfi, Pehre etc. Sorry for comparing sweets with music, but this music is sweet ! This is better for your health than the sweets.
Harsh Ronvelia on Friday, April 13, 2012
Yet India is still plagued by this incredibly mind-boggling caste system in
various parts of the nation, even in the major cities, until this very day!