Average Rating : 4.33
Total Vote(s) : 126
Please rate this song between 1 star and 5 stars (5 stars being the best). Just move your mouse on the stars above and click as per your rating. Your rating will really help us to improve our website. 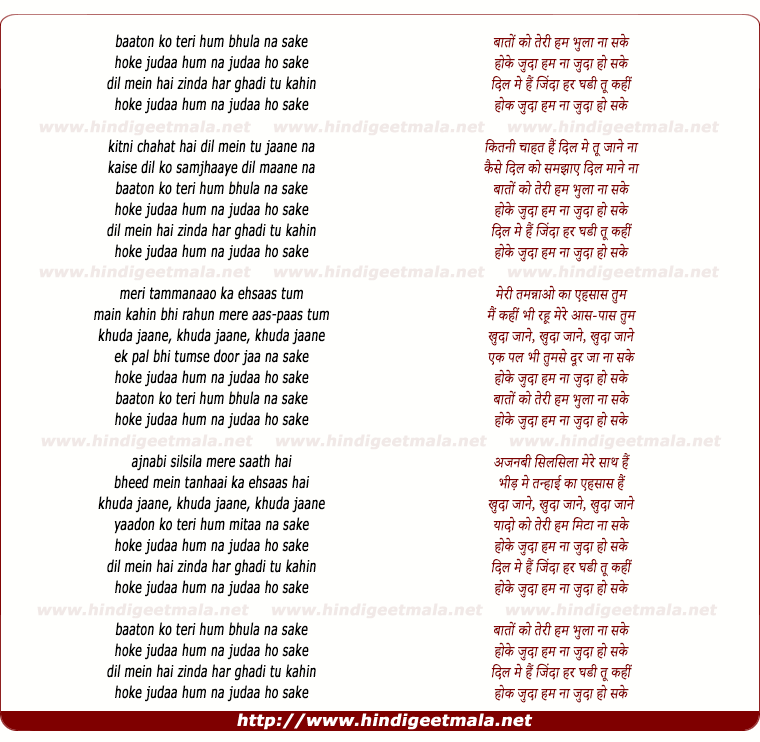 Comments on song "Baato Ko Teri Hum Bhula Na Sake"
Alekhya Das on Thursday, August 27, 2015
Full Video released so quickly? The movie flopped badly.
Why do you make such movies TSeries?
It's better you make a good album with Arijit Singh, KK, Sonu Nigaam, Kunal
Gangawala etc. and make video songs of all those songs. It would be a
better hit!﻿

nidhi shrivastava on Thursday, October 01, 2015
Just superb, Nyc movie, with a massage, Abhishek rocks, Asin too, Movie all
is well is a hit, A must watch movie fr everyone. ..
...frm Gaurav nidhi Shrivastava.﻿

NaasEj on Thursday, August 27, 2015
I felt bad for Asin's character (Nimmi). She loved Inder a lot but he shown
no interest at all to begin with. Her expressions in this song are
priceless..﻿

Kavi Guna on Sunday, November 08, 2015
Asin used to be the top actress in south, but she blowed it totally when
she decided to only do bollywood.. Now she barely gets any movies.﻿

Sumaya Khan on Sunday, September 20, 2015
sad to see asin leaving films...was never appreciated enough..she has a
stunning face...reminds me of the likes of juhi madhuri﻿