Video of this song from youtube
Average Rating : 4.13
Total Vote(s) : 63
Please rate this song between 1 star and 5 stars (5 stars being the best). Just move your mouse on the stars above and click as per your rating. Your rating will really help us to improve our website. 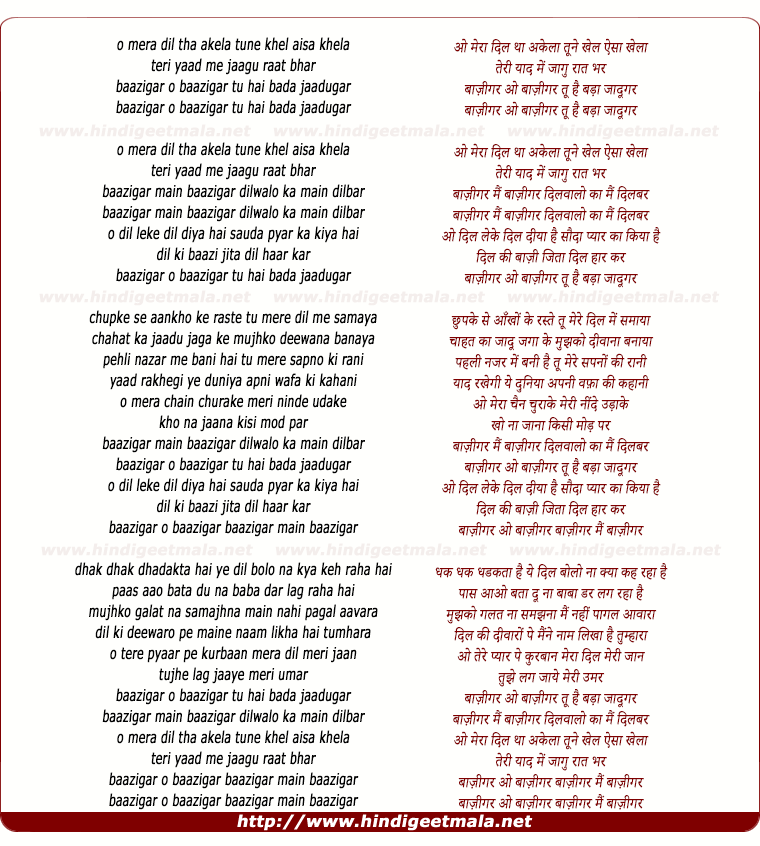 Comments on song "O Meraa Dil Thaa Akela, Baazigar O Baazigar"
Runa Grace on Saturday, May 30, 2015
I wasn't even aware that Bollywood existed when this film came out, and
yet, as I watch this video, it hits a nostalgic chord. There's the
beautiful and sprightly Kajol paired alongside a brooding Shahrukh, yet
it's the romance-novel look and feel of the narrative (all playing in
love-struck Priya's mind) that sets it as a classic-looking piece of
imagery and sound. It also breaks the all-too familiar formula of the
harlequin romance by adding a twist element, a daring one for
Bollywood's 90's heyday, a dashing albeit unconventionally handsome
anti-hero.﻿

Ritesh Kowlesar on Sunday, June 16, 2013
True however Rani, Kajol and Priyanka have the typical Indian looks. Its
airheads such as Katrina Kaif, Kareena Kapoor and Sonam Kapoor that are
chosen purely for their skin colour. Whilst not possessing any acting
skills whatsoever. But luckily there is hope, I see India is slowly getting
past this skin colour bias. Regarding your comment on dark skinned actors ,
there have been many succesful brown actors. My all time favourite Ajay
Devgan is probably the most famous, alongside Amitabh ;)

iloveyou taec on Sunday, January 27, 2013
but still she is the best and many people love her. btw beauty is not
everything in the world someday beauty will gone, you have right to don't
like her but you no have right to insult her. she is actress who do her
best in the movie and it's success, her acting far better than some actress
nowday who only use beauty but can't acting just spoiled good movie. kajol
1 of the best actress in india cinema. please respect or if you cant at
least dont insult.

thirakwa on Monday, July 16, 2012
You're not Indian, and you heard the song maybe once. Yet, you felt the
need to look it up on YouTube and barf all over the comments section?
Nah...I'm not buying it. Looks like someone's obsessed. More likely that
you're frantically j-ack|ng off to Kajol videos. Or did a Kajol lookalike
recently dump you?

MrCassanova08 on Thursday, October 04, 2012
@LinedMemories She looks like a fake person. How can anyone be a fan lol? I
just know a real and fake person when I see one, I've lived Anyway no
respect tovher as a person and as an actress. I'm entitled to my own
opinion..free world rigjt.Express your own. Yes..my life.isgreat
alhamdulillah.