Video of this song from youtube
Average Rating : 4.08
Total Vote(s) : 51
Please rate this song between 1 star and 5 stars (5 stars being the best). Just move your mouse on the stars above and click as per your rating. Your rating will really help us to improve our website. 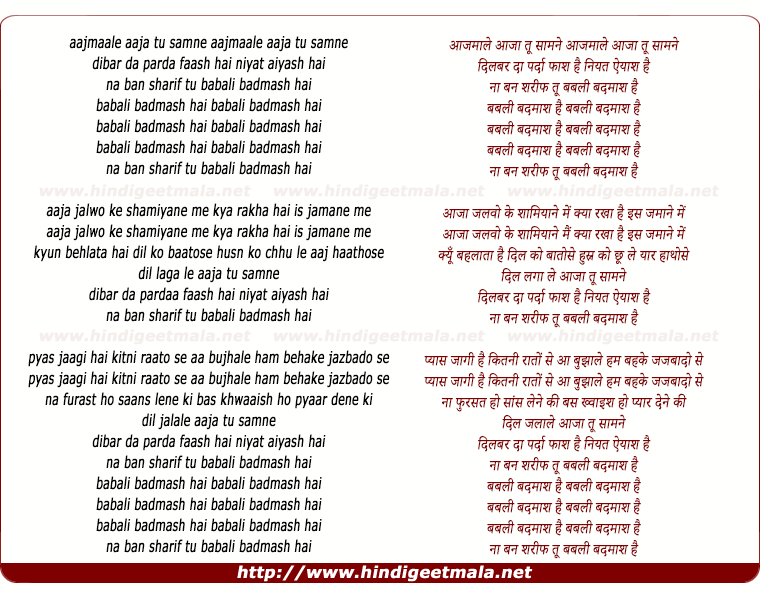 Comments on song "Babali Badmash Hai"
amit saraf on Thursday, April 11, 2013
Priyanka rocks the floor one more time gr8. shootout @ wadala is a true
story based on sharp shooter Manya Surve the complete story was taken from
the book written by S. Hussein Zaidi who is the crime reporter & author of
best selling book " Dongri to Dubai" 10 chapters out of 63 is taken as it
is in this movie explaining the rise of the "Dawood Ibrahim kaskar & his
Elder brother " sabah kaskar". sabir was killed by Manya near prabhadevi in
shoot out which made dawood to kill manya thr police.

aryankhan65 on Monday, June 24, 2013
NO RESPECT for songs like this as the music of this song is copied by 'the great chor' Anu Malik from another 70s R.D.Burman's song called ''Lehra Ke Aaya Hai Jhoka Bahar Ka'' from 1969 movie ''Waris'' starring Hema Malini ..have a search in youtube, listen to that song and realize how BIG CHOR Anu Malik is !! :P :) ''Laila'' is a million times better than this copied song as athat's something ORIGINAL !! Anand Raj Anand (composer of ''Laila'' song) atleast not a chor like Annu !!! :P
Torre Imtiaz on Tuesday, March 19, 2013
i swear god all of you are dumbo's.Shootout at Wadala is set in 80s, and
the song's choreography, costumes and sound are inspired from that era. It
is an ode to the dance and disco classics from the 70s and the 80s. and you
guys are like yuck! because you got used modern songs.plus,2013 is the
100th year of hindi cinema, so films like this and himmatwala and zanjeer
are bieng made to pay tribute to hindi cinema.i hope i explained
everything!!


Edwin Jacob on Sunday, March 17, 2013
I have seen that movie and I still don't think she can act. I don't think
i'm in need of a psych evaluation but allow me to recommend that you start
taking up some English classes. Also, you ought to watch the Miss World
re-run. If you still think this woman is worth a watch then let me tell you
that there is something wrong with the viewers of Bollywood Mainstream
trash these days, that "something" includes YOU.

aryankhan65 on Monday, June 24, 2013
LOL :p only the video is good else the music copied by 'the great chor' Anu Malik from another 70s R.D.Burman's song called ''Lehra Ke Aaya Hai Jhoka Bahar Ka'' from 1969 movie ''Waris'' starring Hema Malini ..have a search in youtube, listen to that song and realize how BIG CHOR Anu Malik is !! :P :)
View all 338 comments related to song Babali Badmash Hai
Popular Links on HindiGeetMala