Average Rating : 4.36
Total Vote(s) : 33
Please rate this song between 1 star and 5 stars (5 stars being the best). Just move your mouse on the stars above and click as per your rating. Your rating will really help us to improve our website. 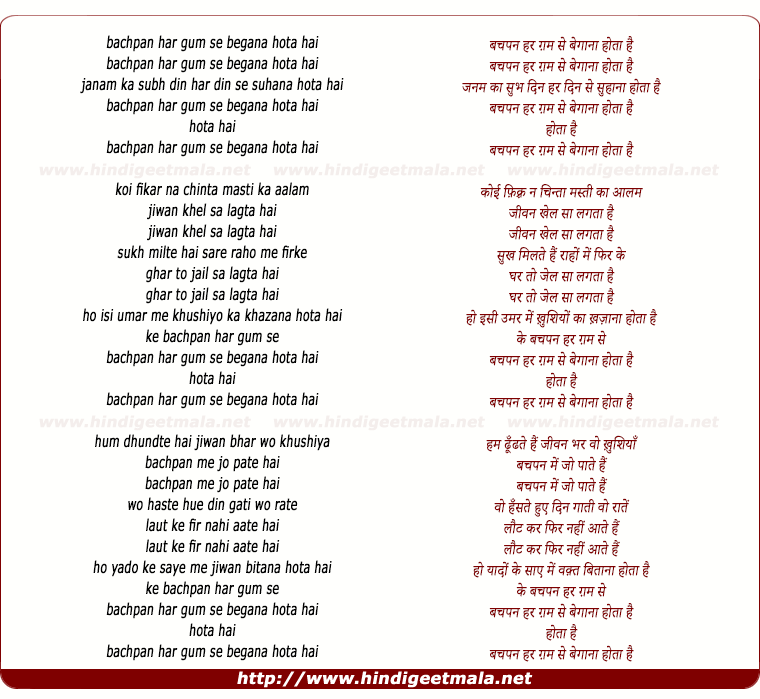 Comments on song "Bachpan Har Gham Se Begana Hota Hai"
Rajeev Bhatia on Friday, August 02, 2013
what a heart throbing and marvellous song by legend Kishore Kumar and a lot
of thanks to Gurdeep ji for searching such songs of Kishore Kumar and
presenting to the deep lovers of the legend Kishore Da. Where such people
go,leaving such real gems for the people of India.

madan vaid on Sunday, December 02, 2012
i think this is the only song madan puri has sung on the screen &what a
song beautifully sung by one &only kishoreda-many a thanks for this rare
upload specially for the sad version

sujaybhatta2009 on Tuesday, September 16, 2014
All songs of this movie were sung by Yashpal Singh … the best is perhaps
“Mangal Bhavan Amangal Haari”. But this is the only Kishore Kumar song,
perhaps only Madan Puri’s on screen song, is most lively and sensible. Many
people are not aware of this song. Many many thanks for uploading this
Kishore Da's rare gem.﻿