Video of this song from youtube
Average Rating : 4.28
Total Vote(s) : 142
Please rate this song between 1 star and 5 stars (5 stars being the best). Just move your mouse on the stars above and click as per your rating. Your rating will really help us to improve our website. 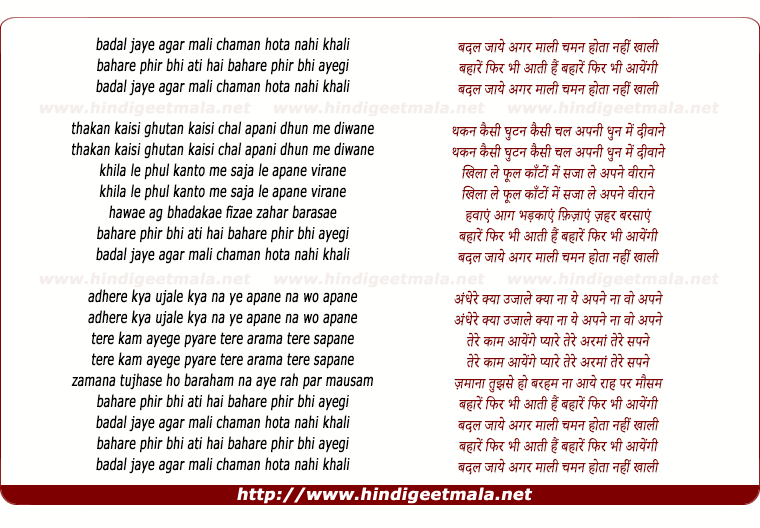 Comments on song "Badal Jaaye Agar Maali"
Shiv Narayan Lal on Friday, April 17, 2015
What I likedost in Mahendra Kapoor,s song " bahaten pfir bhi ayengi", the
music of Guitar, that's cmon like all songs of film Kismat like "lakhon
hain yahan dilwale" etc., Here 2 the scintillating Guitar made the way.
Mahendra Kapoor was unfortunately tied to one tone singing on the behest of
some music composers/ writers as in film Gumrah, "aap aaye to khayal-e
-dile-nashad" etc., and that washed his career.
However, my thrust is vibrations of Guitar like in "kisi ki muskarahaton pe
ho nisar" or "good morning kishore,s voice *RD Asrani in film Bawarchi"
again Guitar
I would be grateful if any one of you, the compilers, contributors for You
tube do come forward to release 10- 20 songs having thrust/ base sound of
Guitar.
Even the giant guitar like instrument used in orchestra in olden times,
that sounded thick note of "toon toon" as you can feel in song "tasveer
banata noon Teri tasveer nahi banti" by Talat Mahmood.
You may also add such songs.
Awaiting for such a release please.﻿

Dilip S. Coulagi on Thursday, April 04, 2013
OPN magic! Who was the poet? As OPN once said in an interview, 50% of a
song's quality comes from the poet, 25% from the music director and 25%
from the singers and musicians. We must give due importance to the poet.
These songs are timeless and priceless not only because of the music and
singing but also the lyric, qualities they would never have if the lyric
were to be pedestrian. Thanks.

Eswar Nakka on Sunday, April 18, 2010
Beti Good Afternoon I want to you to clear one doubt. Why sometimes this
buffering takes so much time. Is there no way to make it fast? Regret
inconvenience caused. Blessings Uncle

Jagjit Singh Ishar on Tuesday, April 22, 2014
The beautiful lyrics, the composition, the honey sweet divine voice. An
evergreen creativity left as a legacy for future generations.﻿