Video of this song from youtube
Average Rating : 4.73
Total Vote(s) : 11
Please rate this song between 1 star and 5 stars (5 stars being the best). Just move your mouse on the stars above and click as per your rating. Your rating will really help us to improve our website. 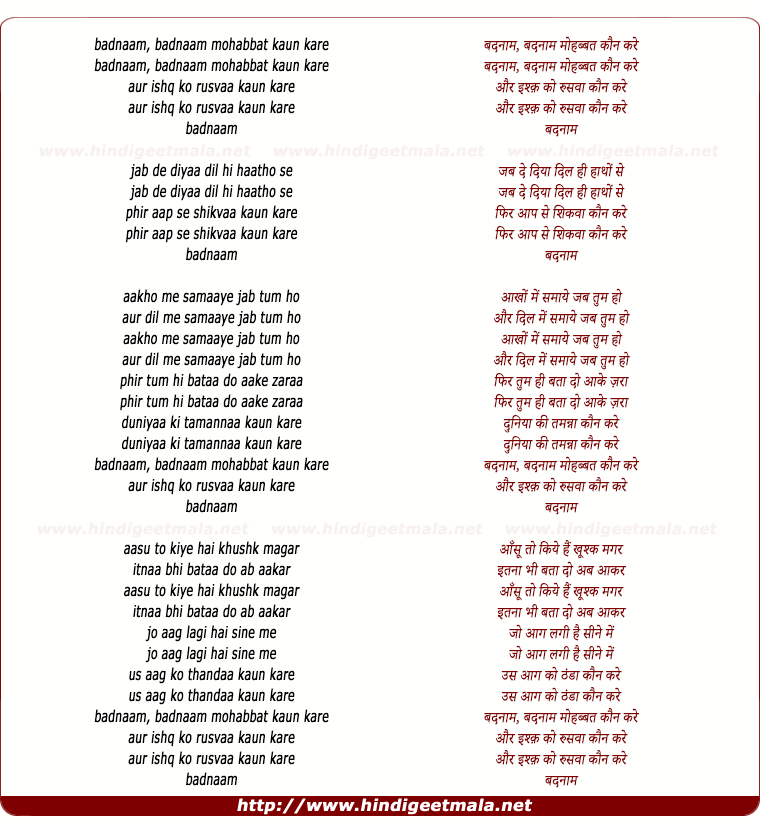 Comments on song "Badnaam Mohabbat Kaun Kare"
Dr.USMAN latif KHAWAJA on Saturday, July 25, 2015
A ground breaking song the first song in indian history where popular music
meets indian classic and only noor could have sung this masterpiece and
executed and elocuted it to perfection and the genius of her was
supplemented equally by sajjad hussain -the first modern musical
masterpiece of Bollywood -merci uploader-shoket made his second blockbuster
after khandan with dost and gave Bollywood the genius called sajjad and
noor became the numero uno beating akhtarbai zohra suriya shamshad into
second places -no looking back followed village girl-my personal fave - lal
haveli -zeenat -anmol ghari -jugnu -nadan-mirza sahiba bari maa -all
blockbusters on her credit alone and she became first queen of indian
industry like queen noor jahan -no one could hold a candle to this self
made girl born to a poor family in a small town who sang on streets and was
discovered by pancholi studio owner when his car stopped outside the gates
of his studio in lahore and a 10 year old girl started to sing a song and
transfixed him into enchantment and that is called god gifted talent and
destiny ALLAH IS GREAT﻿

Moid Hasan on Sunday, April 24, 2011
Thanks Rehma for ths song of early era of madam Noorjehan . Her husband
Shaukat Hussaih Rizve,has also worked in this film .In the beginning
Shaukat Sahib was playing male lead opposite Noor Jehan ,but he withdrew
himself ,the reason of this withdrawal is best known to him .The
Director,Shaukat hussain Rizvi ,has also worked in ths stage and silent
movies, Thanx once again Rehma for this great uupload.

Dr.USMAN latif KHAWAJA on Friday, July 24, 2015
A ground breaking song the first song in indian history where popular music
meets indian classic and only noor could have sung this masterpiece and
executed and elocuted it to perfection and the genius of her was
supplemented equally by sajjad hussain -the first modern masterpiece of
Bollywood -merci uploader﻿

Vidur Sury on Sunday, April 24, 2011
Truly great song Ma'am, one of Noor Jehan Ji's best. Music, unique and
fabulous, is by Sajjad Hussain Ji. Online 5 Noor Jehan Ji's songs out of
total 10 seem to be available, please upload remaining and missing 5 if you
get/have them. Thanks for the lovely upload.