Video of this song from youtube
Average Rating : 4.67
Total Vote(s) : 27
Please rate this song between 1 star and 5 stars (5 stars being the best). Just move your mouse on the stars above and click as per your rating. Your rating will really help us to improve our website. 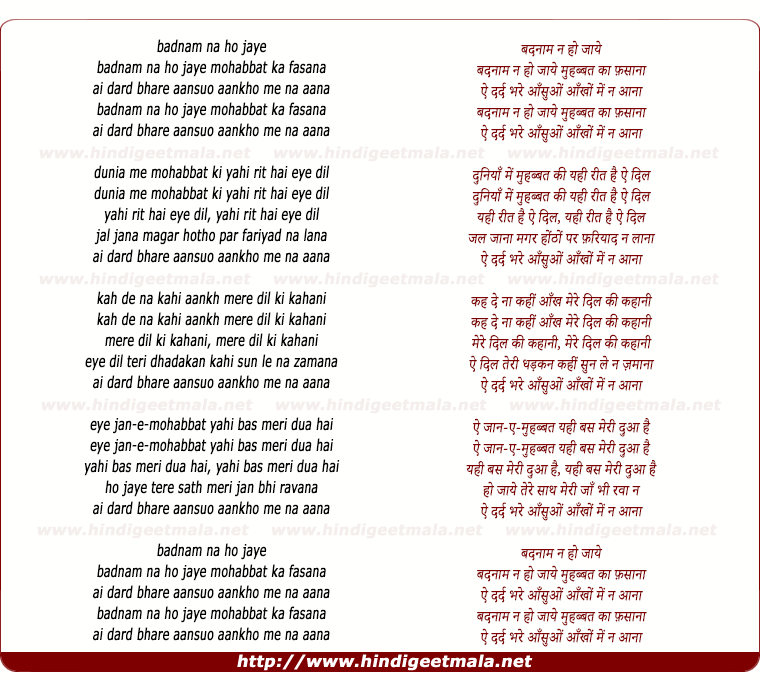 Comments on song "Badanaam Na Ho Jaaye Muhabbat Kaa Fasaanaa"
Sholay48 on Thursday, April 08, 2010
The intensity in the love Kamini shows for DK in this love story made a
very deep impact on me since the day I saw this film when I was a child.
All the songs she sings and her acting in this film bring tears to my eyes
everytime I listen to them. Its been ove 50 years. I know I will not live
for ever, but this is immortal.

graphikamaal on Friday, August 08, 2008
What a beautiful song, one of my most favourite song. Had seen this movie about 25-30 years back when it was telecast on Doordarshan but still remember all the songs, this one, Watan Ki Raah Mein, Todi Todi Bacchhe etc.
satishchopra1 on Thursday, July 08, 2010
An everlasting from Suriner Kaur ! Besides singing all times great Punjabi songs, her melodies for Hindi/Urdu were equally fascinating.
ambindia on Monday, February 02, 2009
would it be possible to post a video clip of the most famous song from this
film? vatan ki raah mein vatan ke naujavaan shaheed ho...