Average Rating : 4.90
Total Vote(s) : 10
Please rate this song between 1 star and 5 stars (5 stars being the best). Just move your mouse on the stars above and click as per your rating. Your rating will really help us to improve our website. 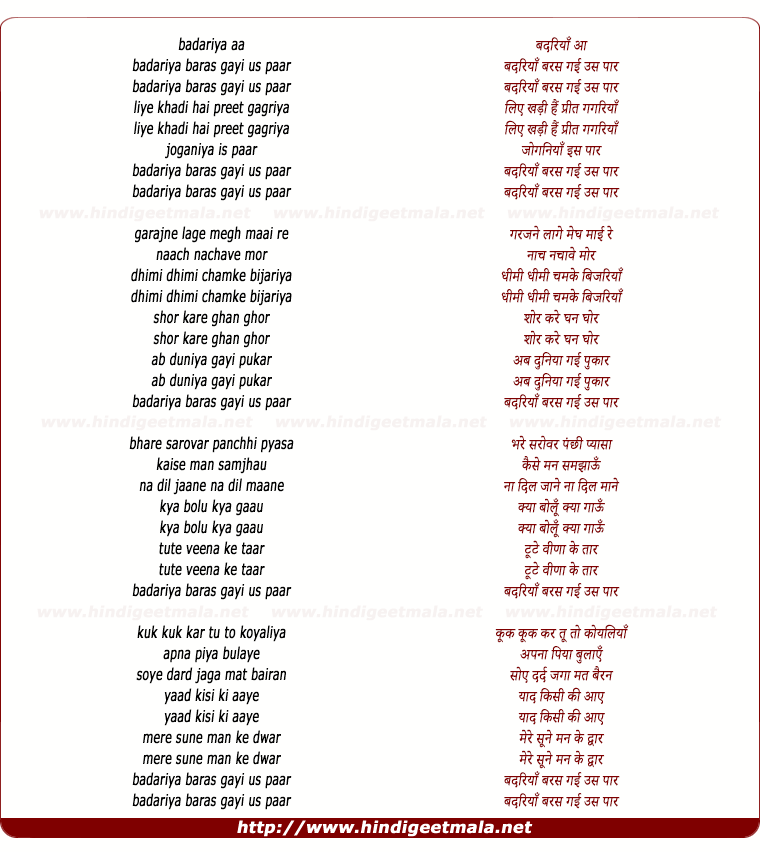 Comments on song "Badariya Aa"
Colonel Rao on Sunday, January 29, 2012
Excellent song by the trio. Mukeshji sang fully in Saigal sahibs style. His
other songs.. Jaa Parwane ja... and moti chugne hayi re Hansi are all in
saigal sahibs style. It was the trend then.Great Surendranathji and Ch Atma
( Not a regular actor), Shankar das guptaji and Jagmohanji sang in Saigal
sahibs style tilll they lived while Mukeshji developed his own style later,
But Saigal Sahibs shadow always followed him till the last. Such was the
influence of saigal Sahib on the singers.

reverseswing on Tuesday, December 27, 2011
This song belongs to the melodies of the 40's. Beautiful singing by Mukesh
Sahib so early in his career with 100% sehgal Sahib's style. Very nice
tuning and orchestration by ace composer Bulo C. Rani ji. Alas! He was one
of the most under rated artists of Indian film industry. "Zameen khagayi
aasman kaise kaise"

rumahale on Sunday, January 01, 2012
@YAWASIMOFA5 Absolutely. This song from Mukesh, I believe was rendered
before "dil jalta hai...from Pahli Nazar". I also agree with you regarding
Bulo C Rani - Alas! His life ended in tragedy. Thanks.