Video of this song from youtube
Average Rating : 4.48
Total Vote(s) : 56
Please rate this song between 1 star and 5 stars (5 stars being the best). Just move your mouse on the stars above and click as per your rating. Your rating will really help us to improve our website. 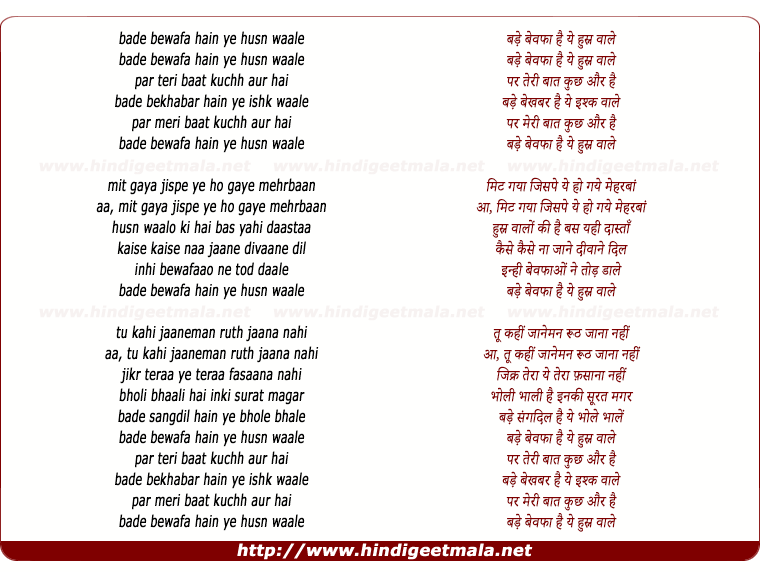 M. Saleem Raikodi Raikodi on Sunday, June 28, 2015
No other Music Director has composed the number of songs with Rafi than LP.
I consider this duo to be the greatest of all the Hindi Film music
directors just because the number of songs they have composed and the
number of hits. Its simply amazing. No wonder earlier MDs have exploited
and Rafi's voice to the maximum, but this duo kept the tempo till his last
breath.﻿

sureshshah3 on Friday, November 01, 2013
Very Good Upload and I really like your taste Jemalbhai. A beautiful ,
sweet , soothing song even at high pitch.Rafi Saab, only could render such
song , deep from the bottom of his heart.God Bless his Soul where ever it
is , as he is still after almost 70 Years (1943-2013) entertaining and
giving pleasure to music lovers , with his unmatchable voice.

FAQEERAHMED on Monday, June 14, 2010
SHAAM44. IS THAT ALL HE WAS? THE MOST ROMANTIC? DID YOU FORGET TO SAY THAT
HIS VOICE WAS FROM HEAVENS. WAS THERE EVER ANY OTHER VOICE IN THE HISTORY
OF INDIA THAT CAME EVEN ONE PERCENT CLOSE THIS VOICE?