Video of this song from youtube
Average Rating : 4.40
Total Vote(s) : 122
Please rate this song between 1 star and 5 stars (5 stars being the best). Just move your mouse on the stars above and click as per your rating. Your rating will really help us to improve our website. 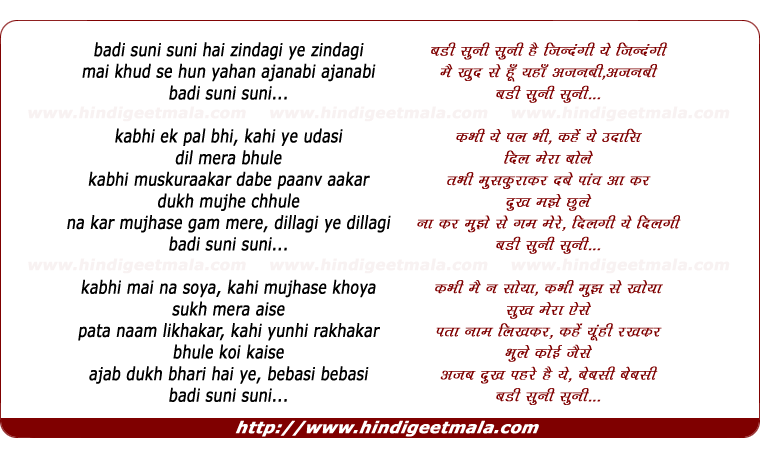 Comments on song "Badi Sooni Sooni Hai, Zindagi Ye Zindagi"
Moti Lalwani on Friday, March 16, 2012
@shaswati09 Burman Dada was not in a hospital, but at home on the day of
recording song. He had created this tune and recorded the song on spool
tape as per the practice followed by him and later by RDB those days. A day
before the recording, he fell ill, and his assistants Bablu-Ashish went to
RD Burman to come for balancing, which w/o a trained ear, like SDB or RDB,
is quite difficult. RDB came for the recording, but he had no hand in
creating the song. RDB came and assisted in recording it.

vaadaenmacchi on Tuesday, August 16, 2011
i dont understand how this song didnt get as popular as other
burman-kishore combination songs. this is so much deeper and touching