Average Rating : 4.37
Total Vote(s) : 102
Please rate this song between 1 star and 5 stars (5 stars being the best). Just move your mouse on the stars above and click as per your rating. Your rating will really help us to improve our website. 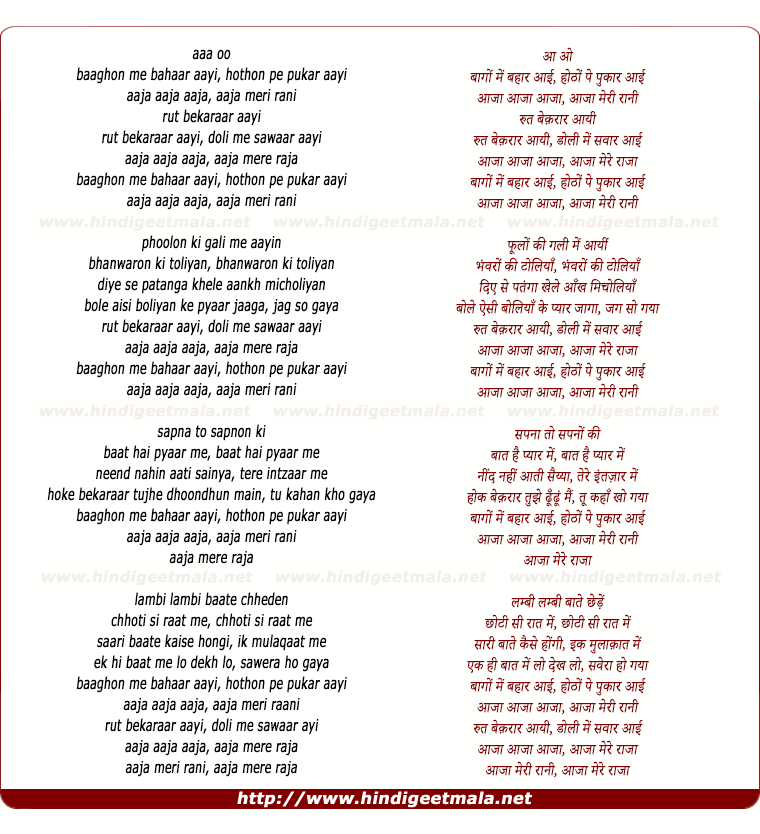 Comments on song "Bagon Mein Bahar Aayi, Hoton Pe Pukar Aayi"
Mushtaq Qureshi on Tuesday, September 16, 2014
What a beautiful song, Anand Bakshi a house hold name since 1956 we cant
brief his contribution to the hindi film industry with his 100's of popular
songs in all time from " Ke Aaja teri yaad aayi to Dil wale dulhaniya le
jaaenge.
But we ll hear his songs and his name till death from various sources like
on vivid bhartti also: Geet likha hai Anand Bakshi ne sangeet Laxmikant
pyarelal ka hai.
Thank u youtube &Thanks for upload﻿

sunderajent on Thursday, May 06, 2010
wonderful job in posting this video... lata as usual melodious and excellent.saari baatein kaise hogi ek mulaqat mein..ek hi baat mein dekh lo savera ho gaya.. these lyrics are beautifully written.. i just wish this song goes on and on , on and on... and never ends.. fantastic...raju shahani
Dr Sekhar Iyer on Sunday, April 18, 2010
This is a wonderful song. Originally it was supposed do have been rendered
by Kishore. Since He did not turn up Anand bakshi was asked to do the
honors and he did a commendable job. I have been listening to this song
since 1971. Sekhar, Mysore, karnataka, India