Video of this song from youtube
Average Rating : 4.38
Total Vote(s) : 224
Please rate this song between 1 star and 5 stars (5 stars being the best). Just move your mouse on the stars above and click as per your rating. Your rating will really help us to improve our website. 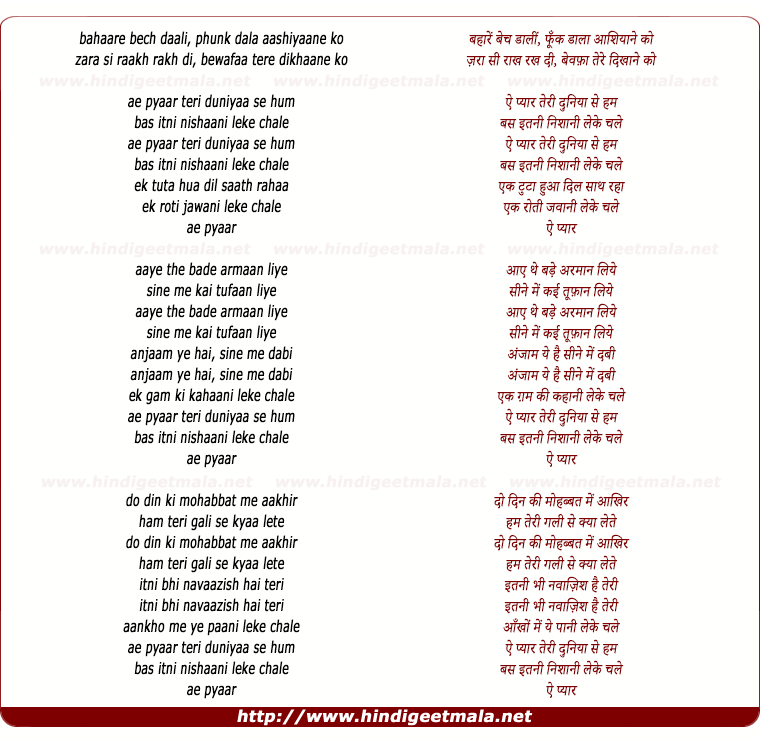 Comments on song "Ai Pyaar Teri Duniyaa Se Ham"
Coucoutchicou on Wednesday, February 23, 2011
Questioned on how he found such wonderful tunes for Anarkali, C.Ramchandra
in this autobiography "Majhya jeevanachi Sargam" states that he composed
the music for Jhanjar (partly financed by him) at the same time and put in
as much love and care for the one as for the other. The music of the one
was a smash hit whereas no notice was taken of the other ... So what answer
could he give?

saz9297 on Wednesday, September 16, 2009
many thanks mirza saheb. i have this melodious song in my collection but in
audio. how i wish to see this song in video. anyway thanks for posting this
beautiful song

Srinivasan Channiga on Monday, July 05, 2010
Before composing such great music for Anarkali (within one week) in 1953,
Chitalkar Ramchandra had used Lataji 's young voice in other films like
this.

V. Siddhartha on Friday, August 21, 2009
A salute to you again, Mirzaji, for putting two kinds of beauty together:
Lataji's vocal beauty with Kamini Kaushal's facial beauty.

tk yaheya on Monday, March 08, 2010
My salute too for giving us this lovely song! You are truly blessed with
the reality in music...