Video of this song from youtube
Average Rating : 3.12
Total Vote(s) : 286
Please rate this song between 1 star and 5 stars (5 stars being the best). Just move your mouse on the stars above and click as per your rating. Your rating will really help us to improve our website. 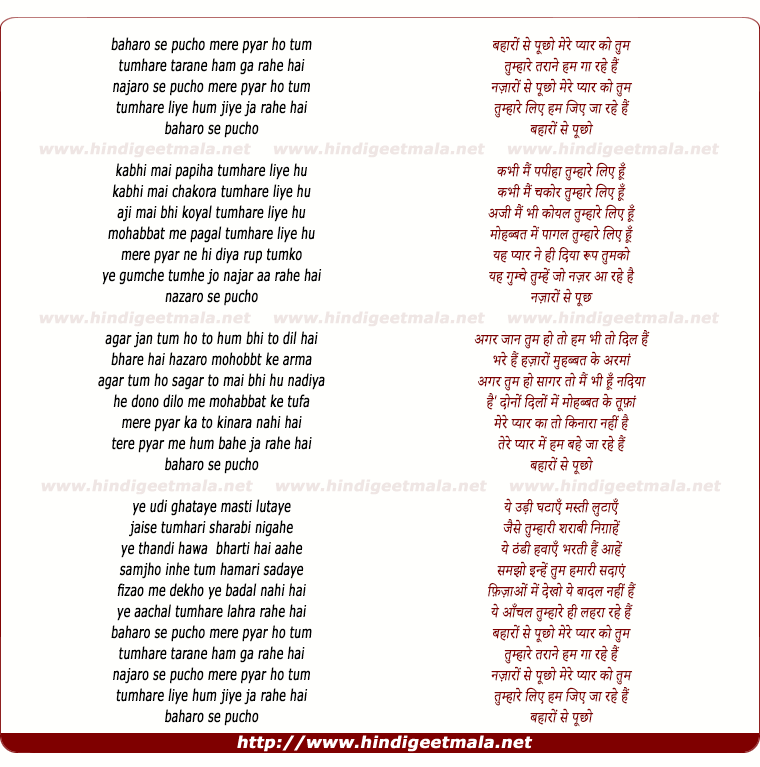 Comments on song "Bahaaro Se Puchho Mere Pyar Ho Tum"
Balakrishnan V on Friday, December 02, 2011
Incidentally exactly after one year I have seen this video! Can you upload
two lovely songs of the film BACHPAN starring Salim Khan father of Salman
Khan, and music by Sardar Malik? One is Mujhe Tumse Mohabbath hain sung by
Md.Rafi and the other one is Tere Hum O Sanam sung by Md.Rafi & Suman
Kalyanpur. Nothing is impossible for you. Take it is a challenge and inform
me about the. possibility.,

Jagjit Singh Ishar on Thursday, October 09, 2014
Subhiraj & Naaz in the frame with nice picturization of the melodious song.
Husband & wife in the real life too.﻿

asha1053 on Wednesday, July 04, 2012
Oh what a beautiful song by Mukesh and Suman. Just love it! Thanks to Sardar Malik for his musical composition.
VeeJay on Tuesday, May 10, 2011
Didn't Naaz and Subi Raj get married? Mukesh's songs always seem easy to
sing for listeners, but the variations that he brings in the singing, is
very difficult for imitators. Great upload, thank you.