Video of this song from youtube
Average Rating : 4.50
Total Vote(s) : 106
Please rate this song between 1 star and 5 stars (5 stars being the best). Just move your mouse on the stars above and click as per your rating. Your rating will really help us to improve our website. 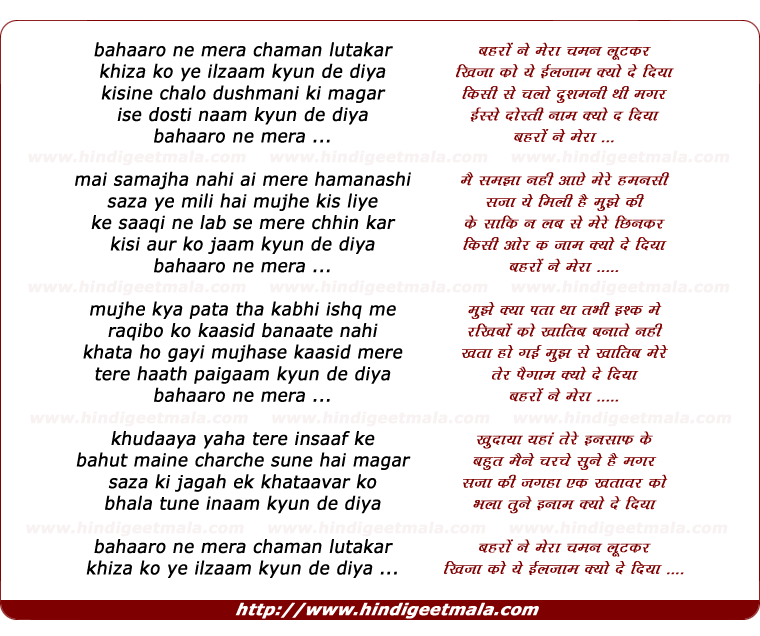 Comments on song "Bahaaron Ne Meraa Chaman Lutakar"
RealMusicKing on Sunday, August 15, 2010
2) As to picking up his fare going back to India. Well, singers / artistes and sponsors(2 types) work out deals before even leaving home base. Once the agreements are signed, than they began their tours. It includes, their airfare, lodging, food and some sight seeing etc etc. Plus, there are/were thousands of loyal fans standing by with their hearts & homes open..mainly for the creme de la creme Lata, Rafi, Mukesh, Talat and few others. I have seen with my own eyes, fans opening their wallets &
RealMusicKing on Sunday, August 15, 2010
1)Hello Yuan and others. Firstly, Devan Verma is the Late Ashok Kumar's son in law. Now, the main issue of Mukesh. He died in Detroit, MI USA. When he was in Washington, DC late at night, he would ask the sponsors to bring hard liquor for him and they did so. Mukesh was very fond of hard liquor and that pretty much took his life. As far as bringing him back to India, I think that was the appropriate thing to do since was a born Indian and everyone would've wanted him there when he passed on.
RealMusicKing on Sunday, August 15, 2010
@Sameer691000. Lol. Engleesh part was being a bit jolly. Claiming to be "RealMusicKing"? I have to be. How come you being / living in India couldn't declare yourself as "RealMusicKing"? Lol. I have claimed to be "RealMusicKing" just as you can mail me your comments without using a stamped envelope via postal service. Or Yuan can keep uploading her songs without even speaking Indian language. Right? Lol.
RealMusicKing on Friday, July 23, 2010
Hello Yuan and thank you for the lovely gem. A very meaningful song. All songs were excellent. One of the last movies of Roshan before he passed away. Roshan died in 1967 by choking on liquor at a dinner party hosted by Shankar Jaikishan.
nawabshaukat on Sunday, August 15, 2010
MEKESH a legend among the few He was superb singer along with RAFEE SAAB KISHORE TALAT MANADA He was master of SAD SONGZ and songs composed in HIGH PITCHES This song of his is also an eg of his HIGHNESS salute to ROSHAN JI 03332604292
View all 63 comments related to song Bahaaron Ne Meraa Chaman Lutakar
Popular Links on HindiGeetMala