Average Rating : 4.40
Total Vote(s) : 5
Please rate this song between 1 star and 5 stars (5 stars being the best). Just move your mouse on the stars above and click as per your rating. Your rating will really help us to improve our website. 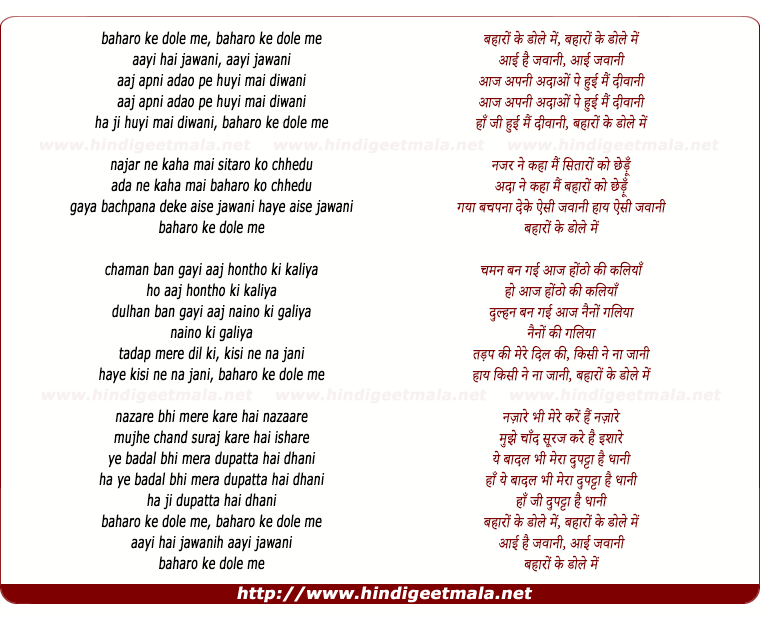 Comments on song "Baharo Ke Dole Me Aayi Hai Jawani"
Pashambay on Monday, October 31, 2011
I humbly differ with u. In 40s famous music director Ghulam Mohammed was Naushad's assistant. Subsequently Ghulam Mohammed became an indepedent composer as early in 1947 but he continued to assist him till mid fifties. After Ghulam seperation Mohammed Shafi who has no film in late fifties and jobless became assistant to mastereo. For reference please watch title of Naushad films (Kohinoor, Leader, Mere Mehboob etc) where Shafi is credited as assistant to music director. Thanx
Pashambay on Monday, January 24, 2011
Mohammed Shafi a very talented music director specially in orchesterization . I remember his composition of film Dara - Do bol tere meete meete and Aa nainon me jhoomkar saajna ; first rendered by Lata, Hement and Sathi and second Lata and sathi are matchless and one will be mesmerized and stuck to listen these songs. In early sixties he engaged with Naushad as Assistant. Very master composer but heavily ignored
His other films are Hulchal, Bazooband, Zindgi and Dara

Pashambay on Monday, January 24, 2011
I add that all these 3 songs are lyriced by Hasrat Jaipuri. Mr Kalakar I request u to please if possible upload 2 choruses of film Dara as mentioned in my below comment. These would further decorate your channel.
MehendaleMM on Tuesday, July 26, 2011
Dear Kalakrji Many thanks for all these numbers. Would you kindly similarly beautiful numbers from film Farmaish for which I have been longing for quite some time. Once again thanks for this upload
56riazali on Monday, January 24, 2011
Aao chale taaron ke par-geet bane dil ke pukar. All the three song of lataji are prtty lovely but amalgamation of three songs in one upload is not right.
View all 8 comments related to song Baharo Ke Dole Me Aayi Hai Jawani
Popular Links on HindiGeetMala