Video of this song from youtube
Average Rating : 4.03
Total Vote(s) : 29
Please rate this song between 1 star and 5 stars (5 stars being the best). Just move your mouse on the stars above and click as per your rating. Your rating will really help us to improve our website. 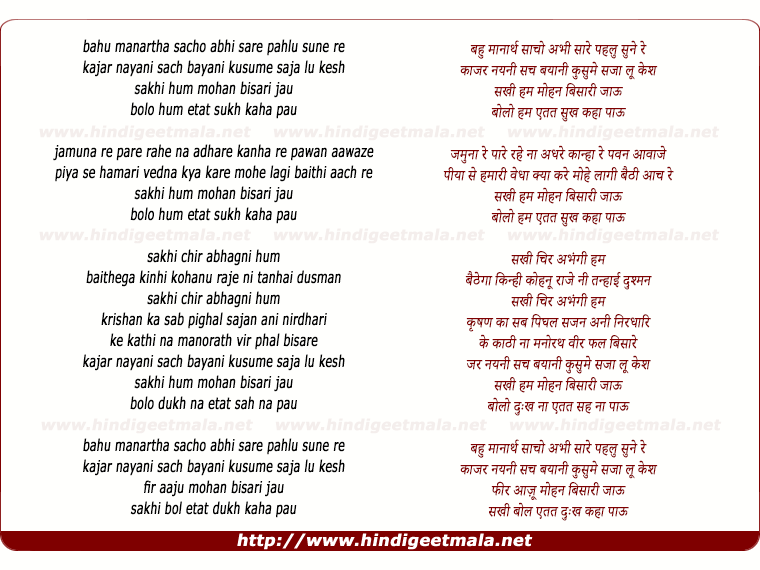 Comments on song "Bahu Manaratha Saccho Abhi Sare Pahlu Sune Re"
TheCinnamon7777 on Friday, December 21, 2012
The lyric meaning, in short.
It says " I am all dressed up waiting for Mohan (my lover) near the bank of Yamuna, the whole dark night had passed and its dawn, but Mohan hasn't come, How unlucky am I, so my desire was a waste, how unlucky am I"
It sounds like Maithili and Bangala mix words, but its beautiful.

Atindriyo Chakrabarty on Monday, August 19, 2013
It's Brajabuli, the closest surviving language is Maithil, and had
influenced the Bengali and the Bhojpuri dialects of Eastern India.

Meghaditya Roy Chaudhury on Sunday, January 20, 2013
Music of the movie really enchanted me. A wonderful lyrical journey
depicted on screen.

Pankaj Kumar on Monday, July 01, 2013
god .i thought this song is sung by lata mangeshkar. what language
is this ??