Video of this song from youtube
Average Rating : 4.15
Total Vote(s) : 139
Please rate this song between 1 star and 5 stars (5 stars being the best). Just move your mouse on the stars above and click as per your rating. Your rating will really help us to improve our website. 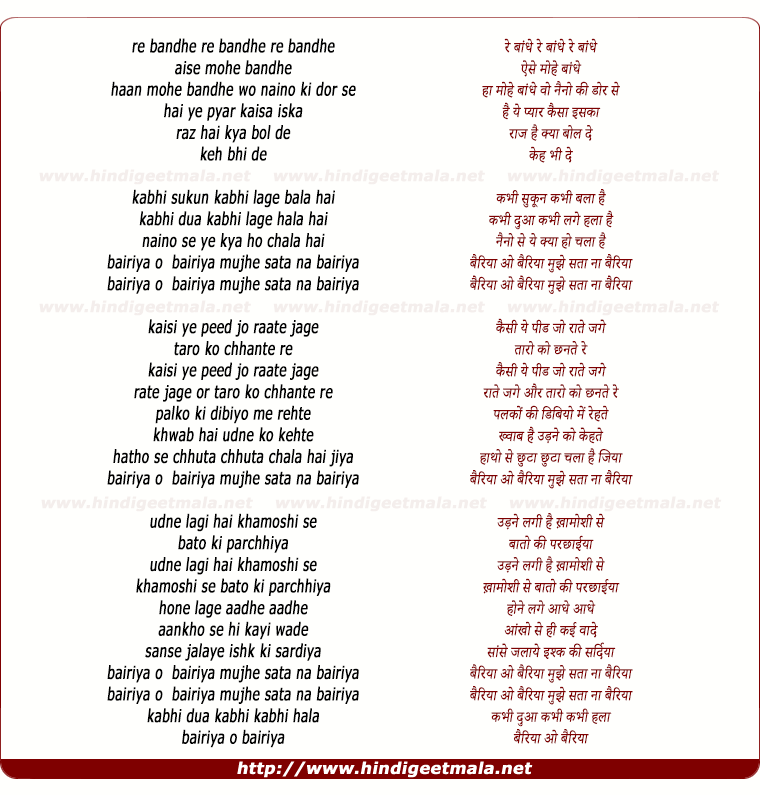 Comments on song "Bairiyaa O Bairiya Mujhe Sata Na"
Indra Das on Thursday, June 18, 2015
What an awful market for Bollywood heroines. Someone of Shruti's talent,
grace and beauty (not to mention lineage) has to be paired with a below
average guy like that. Guess, unlike Sonakshi, she didn't climb enough
rungs to be paired against the "golden oldies" club - SRK, Akshay, or the
other Khans or even the Devgan.﻿

teen413 on Wednesday, October 23, 2013
THUMBS UP - flap every asaram bapu message as a spam or offensive to you.
They're ruining the comment section in songs. I wanna know what u guys
think of the actors and songs not look at their messages. ALSO spread the
word by writing this message on your favourate songs. We gotta get rid of
these scammers

Argha Roy on Monday, August 05, 2013
Yes I know its very annoying that in every video they post such comments
and spam the video.You tube must take some steps..my ancestral house
is in Bangladesh.my grandparents came in India during partition. My
father's side come from Kushtia while mother's side is from Faridpur

AlyaSyz on Tuesday, June 25, 2013
I have strong feeling this movie will work wonders for the entire cast ..
everything so far is amazing ... full family movie for sure a treat to
viewers in this season