We will add as soon as the video of the song is available.
Average Rating : 3.00
Total Vote(s) : 1
Please rate this song between 1 star and 5 stars (5 stars being the best). Just move your mouse on the stars above and click as per your rating. Your rating will really help us to improve our website. 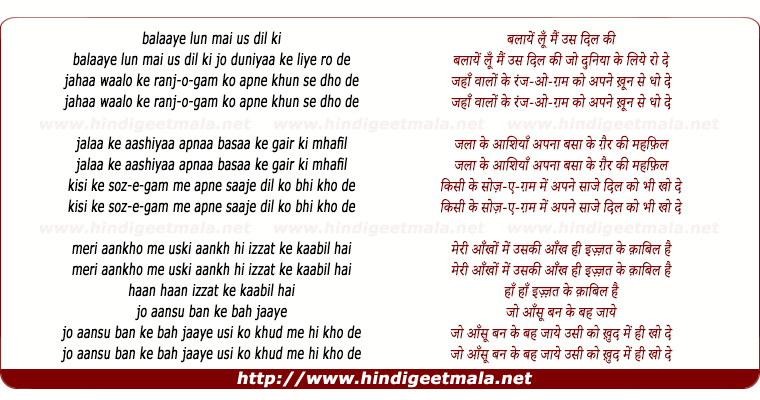 Comments on song "Balaye Lu Main Us Dil Ki Jo Duniya Ke Liye Ro De"
Moid Hasan on Monday, September 12, 2011
No-2 Kanan Devi started her film career with Kananbala as child star , in
silent film 1926,Joydev, an untrained singer,1935 Basabdatta and
Girls'School ,1937 Mukti (Barua) 1939 Street Singer 1939 jogijog and
Hospital, P.S.Barua was unable to obtain her for the role of Paro in Devdas
1935, but played the lead in his next film mikti 1935, her last film was
1959 Srikanta-o-Anandididi.

Vidur Sury on Sunday, September 11, 2011
Great job Sir, thanks for sharing. P. C. Barua Ji has sung very few songs,
another song was a duet with Menaka Hyderabadi Ji in Mukti (1937 - she too
was a rare singer). Great to see such rare and entertaining videos being
uploaded. Barua Ji did quite a nice job in singing.

Eswar Nakka on Monday, September 26, 2011
Bashir ji As Salam O Alaikum I have no appropriate words to appreciate in
the way it needs. Allah bless you my blessings to you mahes