Average Rating : 4.67
Total Vote(s) : 9
Please rate this song between 1 star and 5 stars (5 stars being the best). Just move your mouse on the stars above and click as per your rating. Your rating will really help us to improve our website. 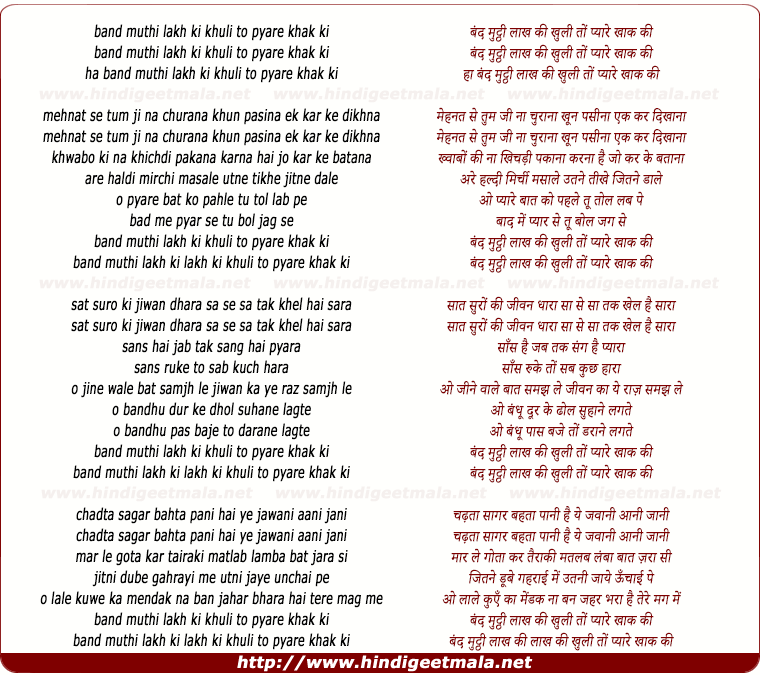 Comments on song "Bandh Mutthi Laakh Ki, Khuli Toh Pyare Khak Ki"
madan vaid on Wednesday, May 23, 2012
i think this is the only song sung by theese three,they have lived &enjoyed
it. like this there is only one song sung by kishoreda,rafiji,mukeshji-pl.
guess

Jay Subramanyam on Thursday, August 01, 2013
No this is not the only song sung by Manna, Rafi & Kishore together.. they
had earlier come together for the song 'Bachcha hai mahaan jag mein..' from
the film 'Nanha Farishta' [1970].

Vijay Krishnan on Friday, March 26, 2010
my God, I had this song for more than 4 years now but had never seen the
video...this is pure treasure weighed in gems :) thanks sooooooooo much -
Vijay