Video of this song from youtube
Average Rating : 4.44
Total Vote(s) : 9
Please rate this song between 1 star and 5 stars (5 stars being the best). Just move your mouse on the stars above and click as per your rating. Your rating will really help us to improve our website.

i face the world with a smile
no one knows what is hiden inside
they see only happiness
they cant see the tears i' ve cried
bandya ho bandya, bandya ho - (4) 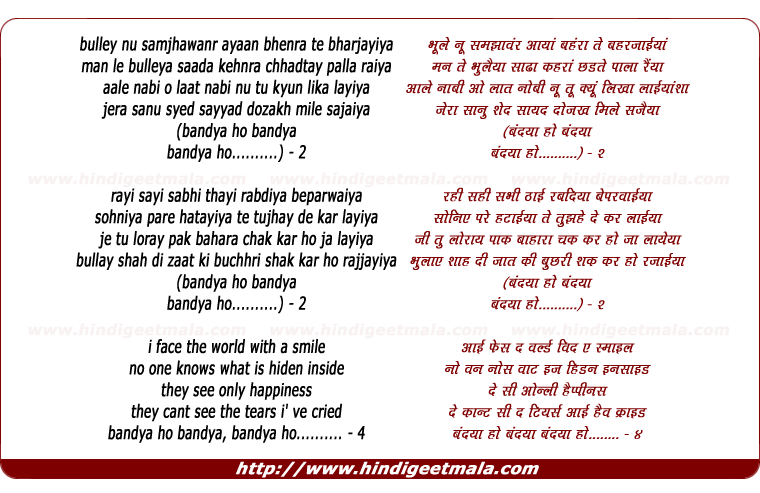 Comments on song "Bandya Ho Bandya"
zoltri1997 on Tuesday, June 07, 2011
This country,it posses power ,it possess talent ,it possesses anything
needed to be a free rich country.But it is near to its fall,but remember it
will leave a mark on the earth,a such deadly mark that although this
countries name will may not be written in books but will shower fear on the
hearts of many.

ishfaq malik on Sunday, April 03, 2011
kashmir has never been the part of India and never could be. With due
respect i love my Indian friends i belong to Indian occupied Kashmir. We
don't want to be the part of India.And for Indian soldiers i know how brave
they are. 6 lacs indian army for 1000 soldiers.@nagabharathc

asmasky on Saturday, August 11, 2012
Hi Friends!! I am looking for MP3 of this awesome song. Though I dont get
the language completely but still I am just in love with the music...!! Can
anybody tell me from where I can download this song..?? Thanks..!! :-)
Loads of love and respect from India.

Renesme004 on Sunday, May 29, 2011
what are the english lyrics?? Everytime i search them, it comes up with
something different? its says: Face the world with a smile No one knows
what hid inside They see only happiness they cant see the tears i have
cried ... But thats not what she says??

terminator824 on Saturday, August 25, 2012
NO2: i think we must fight all those politicians who spread hatred amongst
us and fight those so called religious men to stop violence, if we people
of both countries are united, we must understand that our enemies are those
who are separating us.