Average Rating : 4.23
Total Vote(s) : 1336
Please rate this song between 1 star and 5 stars (5 stars being the best). Just move your mouse on the stars above and click as per your rating. Your rating will really help us to improve our website. 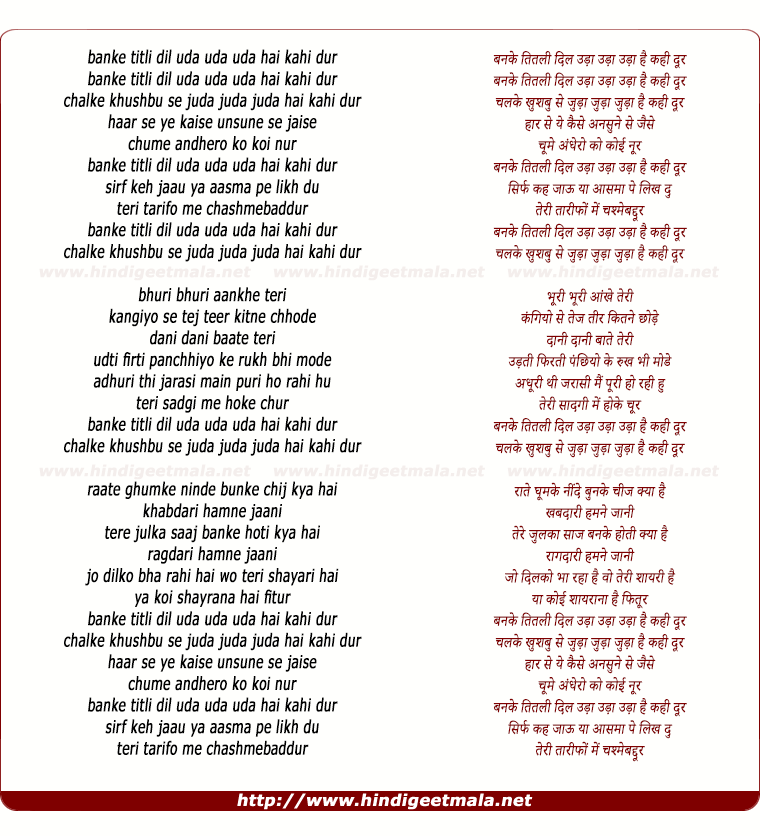 Comments on song "Banke Titli Dil Uda"
alijahu zena on Sunday, July 14, 2013
if you wondering wht the tamil verse means. this is a poem wrote 3 thousand year ago

I have seen the One whose color is like dark rainclouds

He is the one with the mouth that swallowed the butter of cowherds,

He is the Lord of the devas, He is Lord Ranganatha,

He is my nectar, my life!

My eyes have seen my Lord and will not see anything else!


smg242 on Tuesday, July 02, 2013
If you haven't watched many Bollywood movies, AND like SRK, watch Swades.
Especially for NRIs this is a really heart touching movie, and one of the
best performances of SRK till date. Otherwise, also consider other good
B'wood films like Dil Chahta Hai, Love Aaj Kal (the 'Aaj' part of it is
pretty modern), Yeh Jawaani Hai Deewani. Some other recent ones are pretty
good too, like Go Goa Gone (if you're up for zombies), Jolly LLB, Special
26, Kai Po Che. Other great films include Lagaan and Barfi.

Charvi Singh on Thursday, June 27, 2013
Aisi deewanagi was the first song that I played on the cassette player and
everyone loved it.The song and shah rukh became instant hit. The magic
followed with,darr,bazigar,anjam,ddlj.He was favorite of the whole family.I
remember I was so young when ddlj released but I wanted to watch the movie
so badly.My cousin bro who's no more had only 1 ticket and it was running
housefull.I watched the entire movie sitting on his laps.It is one of the
most fondest memory associated with ddlj.