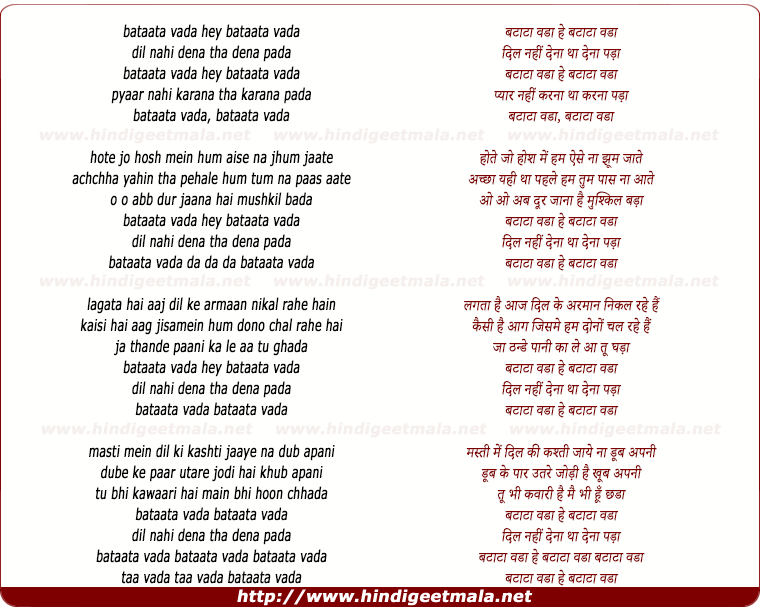 Comments on song "Bataata Vada"
CMAsianMusic on Sunday, November 25, 2012
I like "Batata Wada" by Asha Bhosle and Suresh Wadkar from the soundtrack
to "Hifazat". Congrats to Rahul Dev Burman and Anand Bakshi and... I
haven't watched the movie with Ashok Kumar, Nutan, Anil Kapoor, Madhuri,
Bindu, Shakti Kapoor, Kader Khan and Pran, so I can't review it!

N K on Monday, June 18, 2012
Neither the hugely talented Pancham nor top notch singers like Asha -
Suresh , nor the fact that it is based upon Raga Bhoopkali ( as I learned
somewhere) could save this lousy song. I have however nothing against those
who have a liking for this song.

Abcdef1797 on Sunday, October 02, 2011
I like vada pav too, but this is taking a bit too far! (In a funny way - no hate) what was in that vada? Lol. Also this was made before I was born. Ty for uploading!
Neva2Bizy on Wednesday, September 12, 2012
I smoked weed to this song and it was the funniest thing I ever seen and heard. I blacked out and had to go outside for some air.
kaushiksays on Sunday, February 19, 2012
After years of living abroad I tasted a delicious perfect Vada Pav...I closed my eyes and ...this song popped in my mind.
View all 19 comments related to song Bataata Vada
Popular Links on HindiGeetMala