Video of this song from youtube
Average Rating : 4.00
Total Vote(s) : 29
Please rate this song between 1 star and 5 stars (5 stars being the best). Just move your mouse on the stars above and click as per your rating. Your rating will really help us to improve our website. 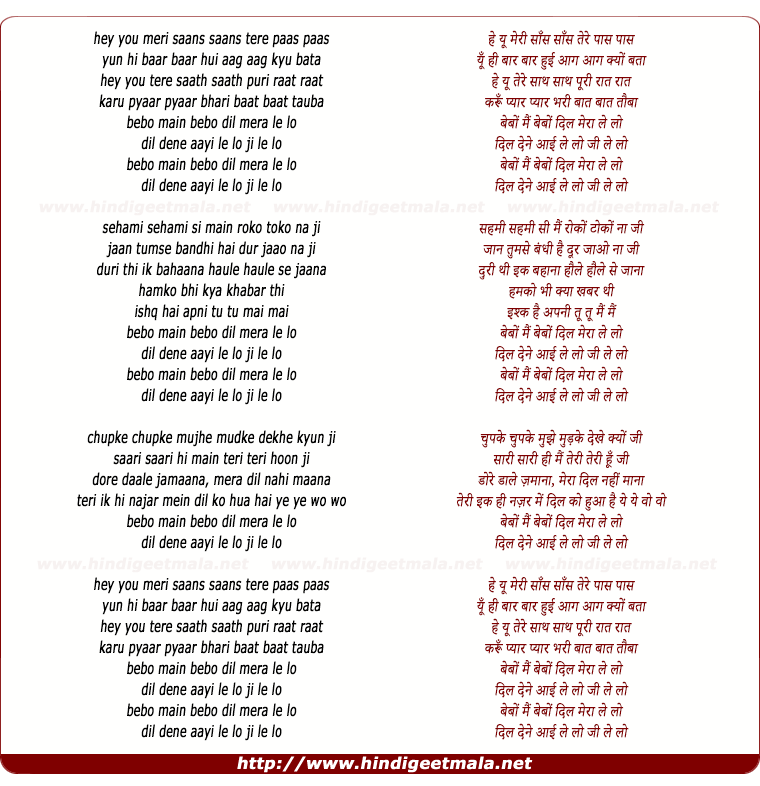 Comments on song "Bebo Main Bebo"
TheRahi00 on Sunday, November 06, 2011
@tamurthDZ Why Somebody dont understand Bollywood is not a genre! The World
change!NowBollywood actor/actress kiss,item number,etc!She is a good actess
and she dont destroyes the work from her family because today she is one of
the most popular actress in Bollywood!Without her family she wouldt be so
popular yes maybe but Ranbir KAPOOR Imran KHAN just because of their family
there are famous(I know my english is bad but i think you will understand
it) If you dont like it so watch old movies :)

MCTanman1 on Thursday, October 13, 2011
@koritala yeah i i'm not the only one watching movies, but i'm one of the
few without their heads up their asses, to see the truyth. look i know some
stuff bout showbiz, a LOT of them are kiss asses, and like kareena,
sellouts!, like Shah Rukh Khan, hypocrits, like aamir khan, true legends,
like salman khan, over rated, like nana patekar, under rated, like amitab
batchan, always found a good charecter to play with age. and so much more,

Shishi A on Wednesday, March 02, 2011
When all the other actresses in Bollywood wear bikinis, do item songs, etc,
it's okay, but when Kareena does it's not okay?? How can you even call this
woman ugly? That is what amazes me. She is one gorgeous, hot woman. She has
been improving with every movie of hers & showing us different roles. She
is definitely one of the big names of Bollywood now & a successful woman, &
ppl's negative comments won't affect any of that.

MCTanman1 on Monday, October 03, 2011
kareena kapoor, the biggest disgrace of bollywood, who is on top ONLY
STANDING ON HER FATHERS AND SISTER'S HARD WORK. looking at her acting wise,
no one will say she emulates the great work karishma did, and don't get me
started on bollywood music, bunch of talentless copycats

koritala on Tuesday, October 11, 2011
@MCTanman1 boss she still holds the best position in the market and
karishma was also d best durng her days .so how can u say she doesnt
act well...she has got so many fans das y she charges like
hell..remember u are not the only one watching movie