Average Rating : 4.06
Total Vote(s) : 32
Please rate this song between 1 star and 5 stars (5 stars being the best). Just move your mouse on the stars above and click as per your rating. Your rating will really help us to improve our website. 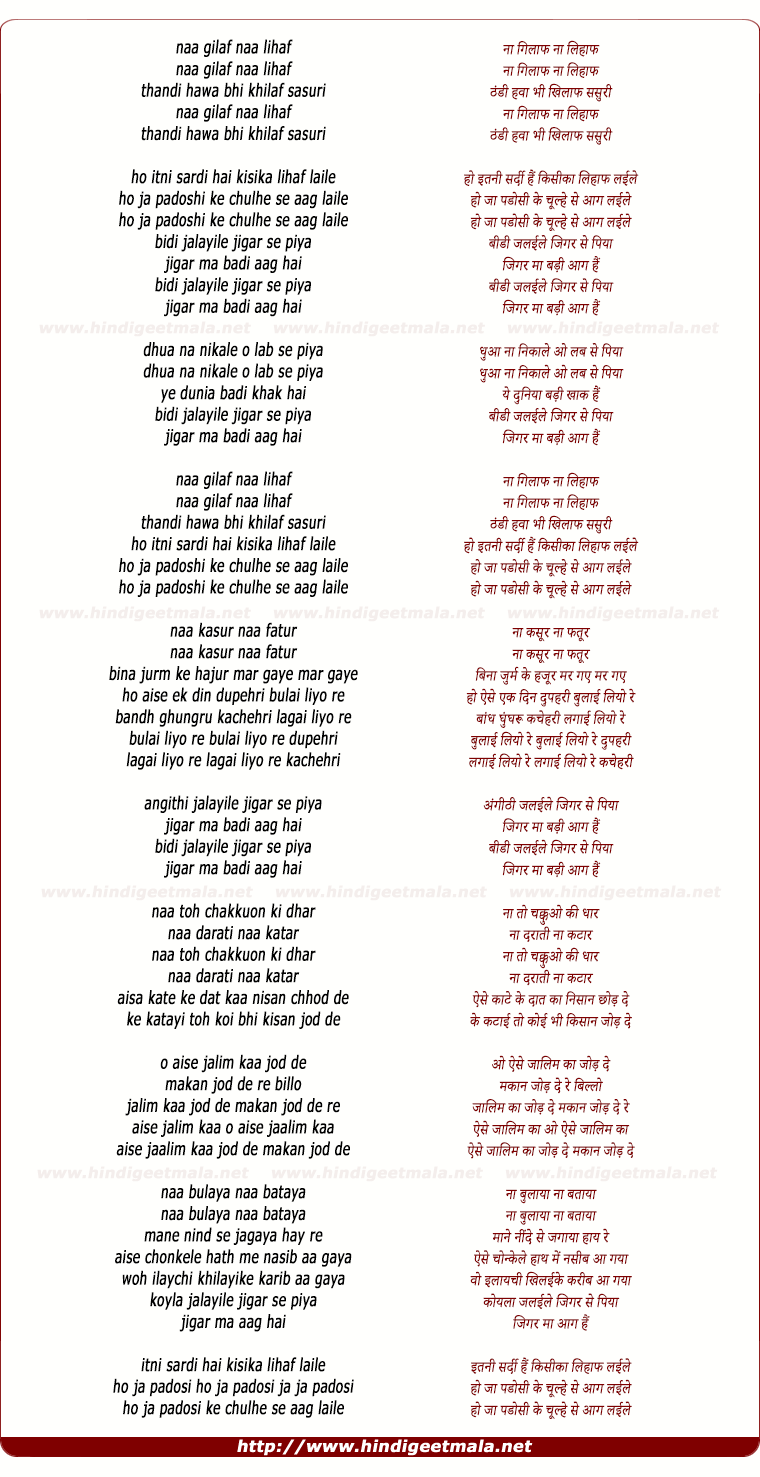 Comments on song "Beedi Jalayile Jigar Se Piya"
141cbc on Friday, July 15, 2011
@pearl1729 well, then there should be no problem in admitting that it's all
URDU...not a single word outside the language...because it is all urdu.
mithun's proper hindi movies were not so popular.i guess these were
developed in india both the languages but the origin of people who own and
developed the language urdu is the reason indians fight shy of admitting
that their media is now totally swamped by urdu having replaced everything
hindi. also urdu being Pak's official language..

Gasper Agacy on Thursday, September 29, 2011
@141cbc for ur kind info when i learnt urdu from a maulana i was told that
the structure of this language is from hindi and sanskrit. 60% of language
is from hindi and sanskrit specially the structural part, 25% is from
Arabic mostly the glossary and vocabulary, 10% is from Persian specially
the way of writing and the way of speaking and receiting and 5% is from
Turkish coz when the language was made Turks were ruling india. so would u
still say it is not a sister language of hindi?

141cbc on Saturday, July 23, 2011
@raktsambandh Your take is wrong mate. Standard Urdu is conventionally
written in Nastaliq calligraphy style of the Perso-Arabic script and relies
heavily on Persian and Arabic as a source for technical and literary
language, whereas Standard Hindi is conventionally written in Devanāgarī
and draws on Sanskrit. However, both have large numbers of Persian, Arabic,
and Sanskrit words, and most linguists consider them to be two standardized
forms of the same language.

141cbc on Saturday, September 17, 2011
@sabreena1khalick yah sabreena...fact is that Hindi is NOT euphonic at
all...Urdu is awesome in this respect...there is no problems in the whole
of India going kaboom and using predominantly Urdu language but some of
them still adamant that it is Hindi and not Urdu.you talked precise when
you said these fellows need to listen to HINDI NEWS to see what it is...far
cry from Urdu..few would listen to hindi songs in this day and age..

141cbc on Thursday, September 01, 2011
@raktsambandh it's funny how you are trying to belittle and knocking Urdu,
whilst being under the full knowledge that Hindi has been "jettisoned" and
DISCARDED by the Indians in their search for status improvement and Urdu
has all but replaced Hindi on the Indian media scene...yes, what is Urdu u
ask...something which has completely knocked out Hindi (which is now
considered the language of the old-fashioned in India now).