Video of this song from youtube
Average Rating : 4.30
Total Vote(s) : 30
Please rate this song between 1 star and 5 stars (5 stars being the best). Just move your mouse on the stars above and click as per your rating. Your rating will really help us to improve our website. 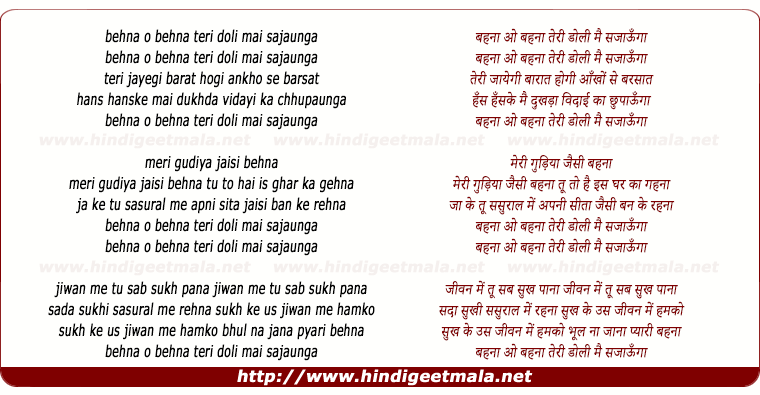 Comments on song "Behna O Behna Teri Doli"
queennikki01 on Friday, March 19, 2010
Very Touching Song. I am hearing to this song after such a long time. Thanks for sharing...
Akash Shukla on Monday, August 02, 2010
I was going to sing this song at my sister's wedding, but while I was
practicing it, I couldn't get through the first line without getting teary
eyed. This song is beautifully sung, and beautifully acted in. Fantastic.

shaistaamjad on Thursday, November 11, 2010
meri sis ki shadi hai and i have tears in my eyes while listing this song. yh kiun zaroori hai k larki apnay parents ka ghar chor k jae? i also miss days before my shadi. pray for my sis from depth of ur heart plz
Akash Shukla on Tuesday, March 08, 2011
@yofoosball The guy singing the song- his sister is getting married and he
is saying, "I will carry you palanquin " (the thing that a bride sits in
sometimes)

Vinod Agarwal on Sunday, February 13, 2011
Very emotional song, even while listening itself the tears rolls down. Love
this song.