Video of this song from youtube
Average Rating : 4.67
Total Vote(s) : 97
Please rate this song between 1 star and 5 stars (5 stars being the best). Just move your mouse on the stars above and click as per your rating. Your rating will really help us to improve our website. 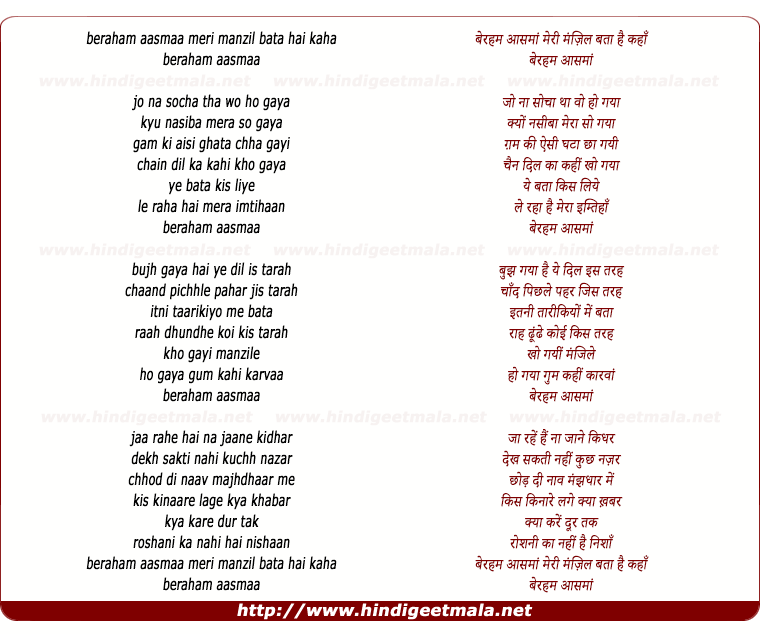 Comments on song "Beraham Aasman Meri"
RealMusicKing on Tuesday, February 23, 2010
Film "Bahana" was released in 1960 but the songs were recorded as early as 1958. This is one of the two of Talat Mahmoods favorites composed by Madan Mohan. The other one was " Yaad jab aaye teri apni guzri zindagi, yaad kar leta hoon main aah bhar leta hoon main" from film "Mohar". Beautiful composition by Madanji and perfect delivery by Talatsaab.
syed abdul Razack on Friday, April 06, 2012
What a beautiful lyrics and Talat sahib voice his voice is like soft waves
in the both corners of river heart touching lyrics and well pronounced in
the song those talented singers will not come again in this fast moving
world people dont have the time to listen these melodies with patience may
almighty bless him with heaven.

Startriumph on Thursday, December 02, 2010
Beautiful song.Great lyrics, Great singer...Amazing combo ! Loved it the
moment I heard it for the first time. Thanks for publishing it here

Startriumph on Monday, January 30, 2012
thanks for sharing...amazing combo of music, voice and lyrics...all greats
! heart piercing ! thanks again !

singhmanojkumar on Monday, July 05, 2010
There was also a redressed version of this song. I do not know where to
look for it. Thanks