Average Rating : 4.19
Total Vote(s) : 89
Please rate this song between 1 star and 5 stars (5 stars being the best). Just move your mouse on the stars above and click as per your rating. Your rating will really help us to improve our website. 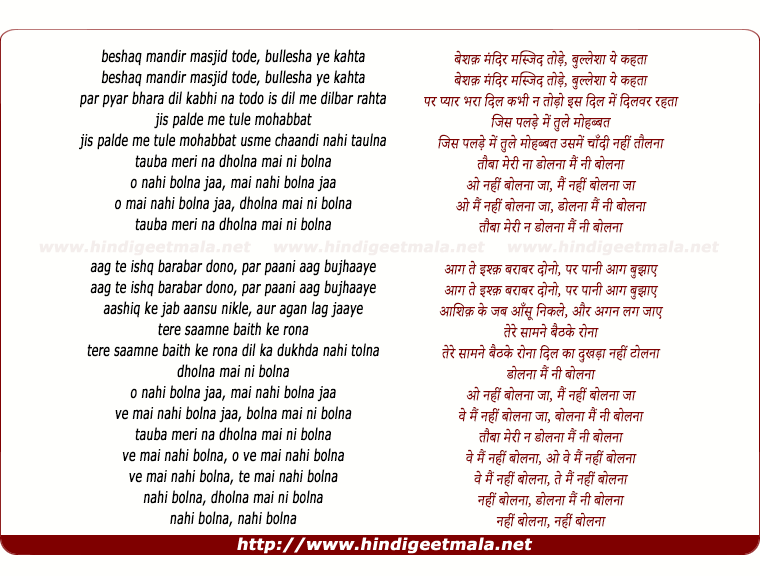 Comments on song "Beshaq Mandir Masjid Todo"
hira1ft on Sunday, October 09, 2011
Lets pretend to be wise enough to understand, its not a question of competition between Mirza Ghalib, Baba Bulleh Shah, Khushal Khan Khatak, Willian Wordsworth, Taigore, Alama Iqbal, Hafiz or any other poet. All of them were icons of their culture, language and age.
The message is important, they preach human brotherhood, dignity, love and peace!
These nobel men cross the boundries of religion, faith and language.
Please guys, leave the shakels of ignorence and reach out for respect & peace

MAYOGARDENS on Sunday, July 11, 2010
The magic of Bulleh Shah's peotry is far more greater than Ghalib or any
other poet. His poetry is not outdated. It is as modern as it was when
written. Lahori munda from New York. thanl you Bulleh Shah Jee.

nandy d on Monday, July 18, 2011
@MAYOGARDENS you can't say that they are two different poets with different
styles and different eras they are both truly great in there own place with
no comparison

mishsood on Thursday, December 22, 2011
narendra Chanchal's Voice Rocks in this classic, he has given his soul in
this song...