Video of this song from youtube
Average Rating : 3.40
Total Vote(s) : 5
Please rate this song between 1 star and 5 stars (5 stars being the best). Just move your mouse on the stars above and click as per your rating. Your rating will really help us to improve our website. 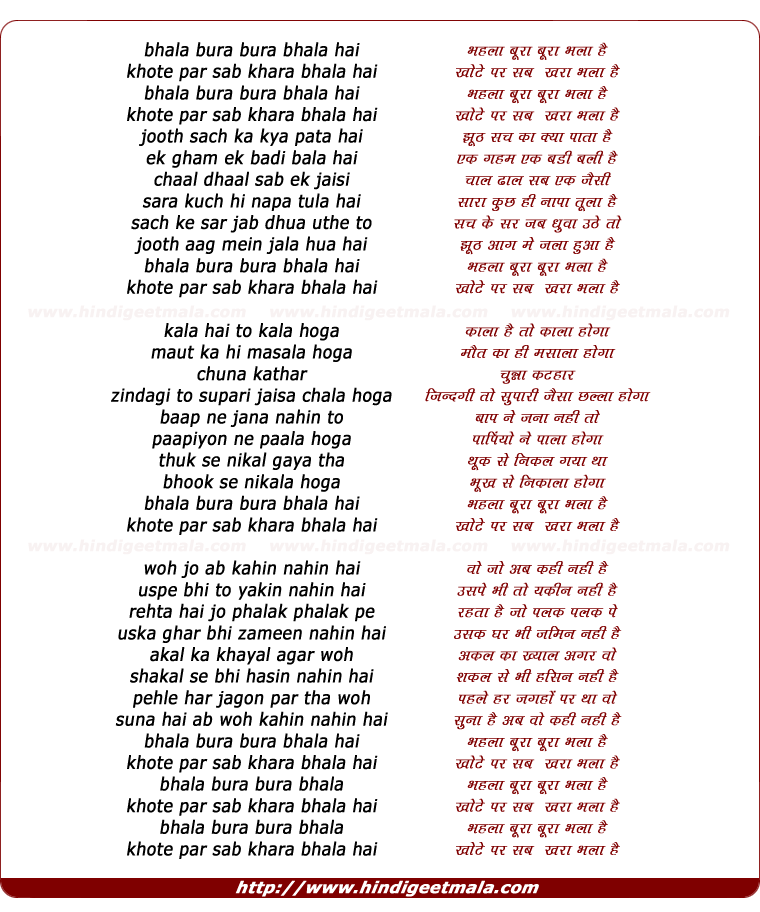 Comments on song "Bhala Bura"
Venki on Sunday, September 18, 2011
There were days even those who couldn't understand used to watch his movies
just because of his legendary acting and the way he takes a movie entirely
on his shoulders and runs towards success thus inspiring even a common to
have higher ambitions. He inspired generation after generation. Truly a
SUPERSTAR ANG KING OF THE KINGS IN WORLD CINEMA.

Venki on Sunday, September 18, 2011
He is the only actor from hindi cinema who was considered and loved by
non-hindi people just like they love their native superstars. Truly a great
person. One of my friends who went to Mumbai visted Big B and even in
between shooting breaks, Big B was coming to meet many fans waiting
oputside and patiently speaking to them and asking from where they came.

Venki on Sunday, September 18, 2011
Sikander bhai. Thank you for the video. Big B is the ASHOKA OF INDIAN
CINEMA. Just like Ashoka remains unchallenged even after 2396 years, Big
B's fame will remain eternal as a legend in modern indan history. He is a
mix of great actor, extraordinary mass hero, legendary crowd puller,
massive super star, simple human without arrogance, loved by all,

Venki on Sunday, September 18, 2011
The next generation actors like Aamir, Sallu, SRK, Ajay, Akshay have
shared all those above qualities among them but none of them have all those
qualities in one person. That's Amitabh stands tall in indian cinema
history even in next millenium. Proud to be an INDIAN and proud to be a BIG
B FAN.

Venki on Sunday, September 18, 2011
He is the only superstar from Bollywood who has equal fan following in
non-hindi speaking states like AP,TN,KA,KL,WB,NE,OR. No other actor from
hindi cinema was accepted outside hindi speaking states. It's ONE AND ONLY
ONE BIG B.