Average Rating : 4.33
Total Vote(s) : 15
Please rate this song between 1 star and 5 stars (5 stars being the best). Just move your mouse on the stars above and click as per your rating. Your rating will really help us to improve our website. 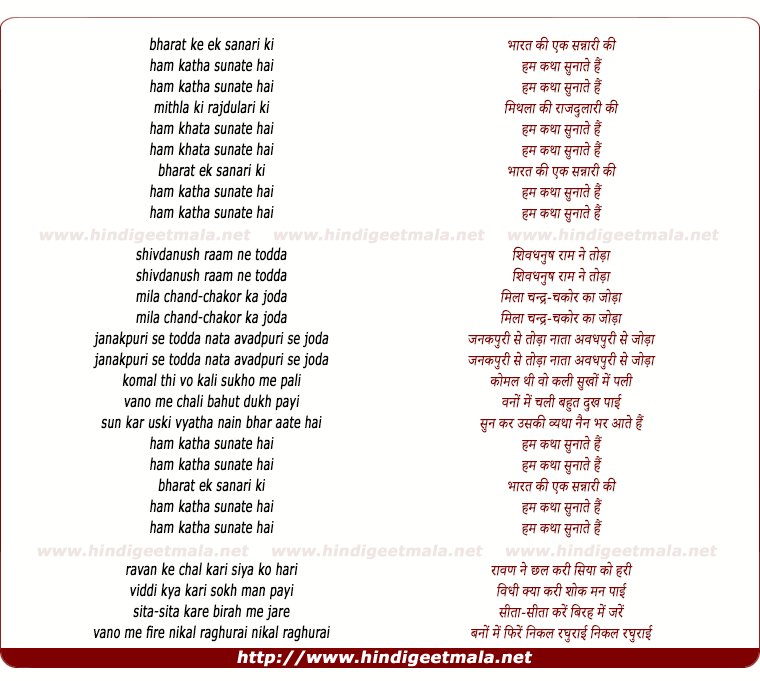 Comments on song "Bharat Ki Ek Sannari Ki"
BOB IYER on Friday, December 21, 2012
One of the very first films my parents took me to watch and i learnt all
the songs and used to sing to friends.There were two other songs sung by
Valmiki ji ,Ajab vidhi ka lekh and Gayi tu gayi thyag mayi. My mother and
siblings used to ask me to sing thiese two songs as I had learnt them well
because we had the disc.The present song Bharat ki ik sannari ki I didn't
know the words until today. So thanks Apte ji for this upload!

nandi4crc on Tuesday, April 30, 2013
There was an abbreviated version of this movie for children called "Bal
Ramayana" which a lot of us watched in Delhi as children.

Priyansh Doneparthy on Saturday, November 26, 2011
@deepasahni Gandhiji liked this film in such a way that after watching this
film he never wanted to see any other film.

Priyansh Doneparthy on Saturday, November 26, 2011
Actress Nalini Jaywant (who passed away on 20th December of last year -
2010) is the cousin of Shobhana Samarth.