Video of this song from youtube
Average Rating : 4.23
Total Vote(s) : 105
Please rate this song between 1 star and 5 stars (5 stars being the best). Just move your mouse on the stars above and click as per your rating. Your rating will really help us to improve our website. 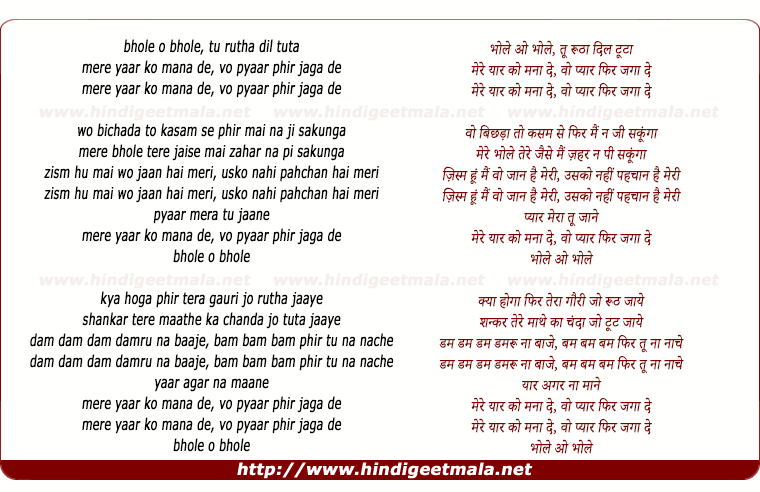 Comments on song "Mere Yaar Ko Manaa De"
Liakot Ali on Monday, June 28, 2010
My favourite Film, I love this film, I love this song, Great voice Kishore
sir, I love all songs from this film. I love this actor Amitabh Bachchan at
his best, I love all actors in this film (Amjad Khan, Kader Khan.).
Underrated film, it was a super hit but deserves to be a SUPER BLOCKBUSTER
HIT

mautand on Tuesday, March 29, 2011
kishore was the only melodious in Indian Bollywood. Even more rythmatic
than Rafi, as this song proves clearly. this voice has simply crossed all
the limits in the history of mankind.

indianfkdbyindians on Wednesday, August 24, 2011
i remember when this song was out my 5 year old nephew would sing MAMA
ROTHE ,since i got ill and became poor he dont want to know ,at the age of
30 ,its sad they dont know the meaning of MAMA ,i suppose there are lots of
people out there who have exprienced this ,sad

jigesh78 on Sunday, August 22, 2010
if u observe the face expressions of Amitabh in all his movies, u would know that he is a super talented actor and noone is near him.
Jawed on Sunday, March 13, 2011
man this song brings memories from afghanistan, paid so much money to rent
this movie and a vcr lol but it was all worth it :)